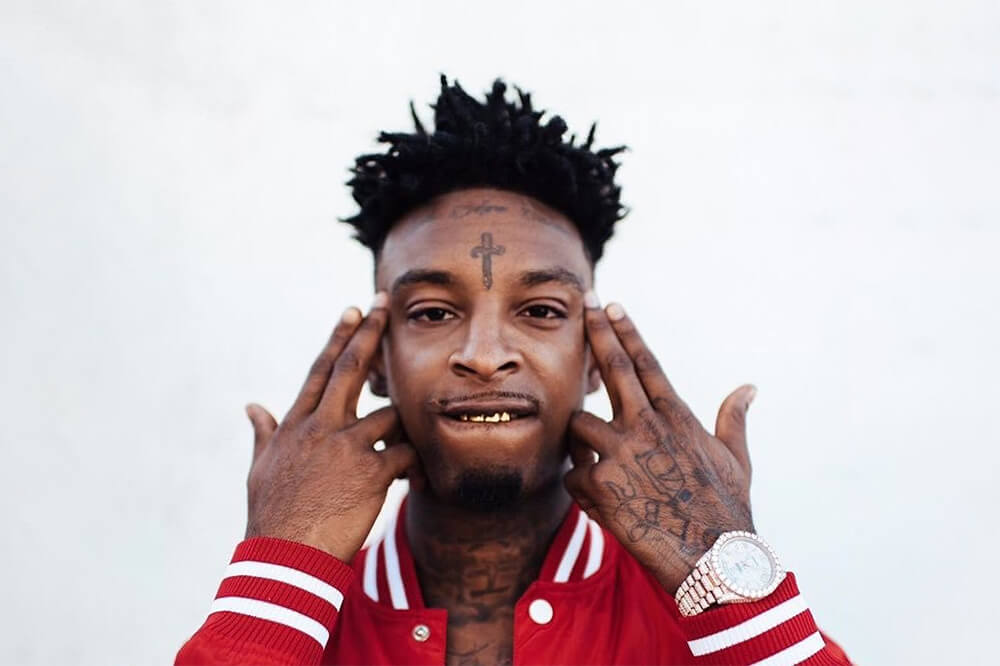 Rapper and producer 21 Savage is at the heart of the Atlanta trap scene. After breaking through with his 2016 mixtape Savage Mode (with Metro Boomin), the artist has risen to become one of the biggest names in rap music.

In 2020, he dropped Savage Mode II – his third collaborative release with Metro Boomin. Once again, the record topped the charts. It was featured in top 50 albums of year rundowns by Billboard, Complex, Guardian, NPR, and more.

If you’re not yet familiar with his music, this list will introduce you to some of the best 21 Savage songs the artist has released to date.

The concluding track on i am > i was, ‘4L’ features a characteristically dark trap beat, lifted by a plucked guitar riff and flute hook. The track has a menacing feel. Featuring Young Nudy, who is also a member of 4L, the pair rap about guns and violence.

4L stands for ‘for life’ or ‘until death,’’ and 21 Savage, as well as Young Nudy, refer to it a number of songs. Young Nudy talks about the meaning of 4L in this video.

One of the oldest 21 Savages songs on this list, ‘Red Opps’ comes from debut EP Free Guwop. Produced by Sonny Digital, the track features a minimal trap beat with extremely heavy bass. It is one of the artist’s darkest, most shocking tracks.

The track is notably violent, opening with the line, ‘I just bought a pistol it got 30 rounds in it / pull up at yo momma house and put some rounds in it.’ The track’s refrain emphasises its extreme violence, ‘I’m on that slaughter gang s***, murder gang s***.’

From 21’s classic album i am > i was, ‘ball w/o you’ shows the artist at his downtempo best. With its mellow organ riff and steady trap beat, the track is a fully-fledged heartbreak song.

21 doesn’t hold back from addressing the fact that he’s been hurt. The lyrics from the refrain capture the track’s sentiment: ‘thought you had my back / you let me fall / you healed my pain / then you caused it / now I gotta ball without you.’

A firm fan-favourite that shows the artist’s versatility, and his ability to deal with more intimate and emotional themes. Definitely amongst the best 21 Savage songs.

One of 21 Savage’s essential tracks, ‘a lot’ (feat. J. Cole) is one of the stand out tracks on i am > i was, and one of the artist’s best-known and most-loved tracks. The track won the Grammy award for Best Rap Song in 2020.

With its soulful vocal sample and irresistible refrain, the lyrics speak about 21 Savage’s journey and his sense of integrity. In the song, 21 touches on deaths and incarcerations around him that turned him into a ‘beast,’ but reflects that ultimately, after weathering storms, ‘the other side was sunny / I get paid to rap on beats.’

The track also touches on the desperation of many artists in the music industry who pay for streams: ‘How many faking they streams? (A lot) / Getting they plays from machines (A lot) / I can see behind the smoke and mirrors / N****s ain’t really big as they seem.’

‘Rich N**** S***’ (feat. Young Thug) comes from 21’s 2020 album Savage Mode II. With its laidback beat, bass guitar, and mellow synth sounds, the track has a blissfully chill vibe. The feature from Young Thug with his distinctive melodic vocals lifts the track to another level.

As the title suggests, the track is all about 21 Savage’s exploits, including the sentiment, ‘I won’t put a watch on ‘less it cost a hundred thou’ / I want all the money and the power.’

The track has an undeniable bop and is definitely amongst the best 21 Savage tracks from Savage Mode II.

Ocean Drive is the track that concludes Savage Mode. A firm fan-favourite, the track has a big chill vibe with its slow trap beat and dark, minimal production.

The lyrics reflect on 21 Savage’s journey, from the streets to Ocean Drive where, in the song, he’s sipping codeine. Lyrically and musically, it’s amongst the artist’s more understated songs, and all the better for that reason.

One of the best 21 Savage songs from Savage Mode, and arguably one of his best ever.

‘No Heart’ is one of the biggest tracks from the artist’s breakthrough 2016 EP Savage Mode. Co-produced with Metro Boomin, the track is platinum certified, and one of his most-streamed on YouTube. As the name suggests, although the flows are smooth, the track is brutal.

The lyrics tell of 21 Savage’s journey from the streets, boasting of his hardness and general disregard for anyone he considers soft. Ponder on the following lines, ‘pull up on you, tie your kids up / pistol whip you while your b**** naked / “Come on, man, Savage you know I always play your mixtape” / Yeah, n****, f*** all that, ask your b**** how my d*** tastes.’

As the man says himself, ‘I grew up in the streets without no heart.’

4. can’t leave without it

One of the top tracks from i am > i was, ‘can’t leave without it’ epitomises 21 Savage’s dark, minimal trap sound. The cold beat features a minor piano loop and an unexpected flute riff that creates an ominous feel.

The track features fellow trap icons Gunna and Lil Baby, with the three rapping about their style and sexual endeavours. The line ‘can’t leave without it’ is about guns – 21 Savage often refers to carrying a glock.

One of 21 Savage’s most-streamed tracks of all time, ‘Glock In My Lap’ is one of the biggest tracks on Savage Mode II. The track peaked at number 19 on the US Billboard Hot 100.

Featuring Honorable C.N.O.T.E. and Southside along with Metro Boomin on the production, the track has a menacing and cinematic feel. The lyrics describe the artist in a state of being always prepared for violence with his gun ready in his lap.

The hard trap beat and impressive production make this one of the best 21 Savage songs.

The lead single from 21 Savage’s debut album Issa Album, ‘Bank Account’ is definitely amongst 21 Savage’s most popular tracks, and one of the tracks that helped put him on the map. It peaked at 12 on the Billboard Hot 100.

Produced by 21 himself (with Metro Boomin as co-producer), the track boasts clean, minimalist production using a sample from 1974 blaxploitation film The Education of Sonny Carson.

The track features a smooth flow, while the lyrics tackle typical trap tropes, name-dropping luxury brands, with the refrain boasting of the multiple millions of dollars headed into the artist’s bank account.

‘X’ is without a doubt one of 21 Savage’s biggest tunes. Featuring fellow Atlanta trap icon Future, the track was the lead single from Savage Mode and is certified double platinum.

The track offers quintessential Metro Boomin production with its dark, ominous feel, and flute riff. In terms of lyrics, the track features both 21 and Future rapping about their ex-girlfriends and their lavish lifestyles.

The track is a classic introduction to 21 Savage and his sound, and a strong contender for the best 21 Savage track to date.