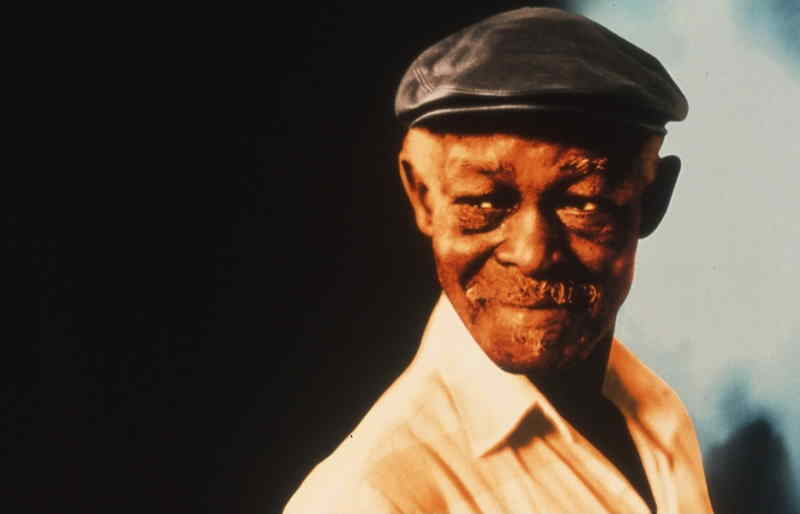 Cuba is regarded as one of the most important regions in the world for music. Its distinctive sounds and rich history is formed from a blend of West African and Spanish musical influences.

The country has spawned a wealth of styles and structures including the son, trova, danzón, mambo, chachachá, Afro-Cuban jazz, and more.

In the 90s, revival projects Afro-Cuban All Stars and Buena Vista Club had an enormous impact in reviving traditional Cuban styles such as the son cubano. These bands, which were comprised of legendary Cuban musicians of the 40s and 50s, brought traditional Cuban music to a global audience.

Cuban musicians also had an enormous impact on the emergence of popular Latin-crossover music in the 80s and 90s.

This list will introduce you to some of the most influential and most famous Cuban musicians of all time, as well as new Cuban artists who are making waves today.

Silvio Rodriquez is Cuba’s most famous folk singer, and is credited with leading the Nueva Trova movement.

Neuva Trova (‘new trova’) evolved in the late 60s after the Cuban Revolution in 1959. It is rooted in traditional Cuban folk music (trova), which is typically guitar-based, poetic, and romantic in its lyricism.

Rodriquez’s neuva trova style built on traditional trova with politically ‘progressive’ lyrics relating to socialism, colonialism, sexism, and wider political issues. His lyricism and influence has led to him being branded as the ‘Cuban John Lennon.’

His most famous songs include ‘Ojalá’ and ‘Unicornio.’ Poetic and deeply political, Silvio Rodriguez is an icon of Cuban music, and one of the best-known Latin American songwriters of all time.

Cachao is the nickname of Israel López Valdés. He is a Cuban double bassist and composer who has been credited with co-inventing the mambo, as well as spearheading the descarga.

Cachao was a political exile in the US in the 60s, which saw him play in a number of bands in New York. However, it was not until the 90s until he received significant recognition.

Before his death in 2008, Cachao was awarded Hollywood Walk of Fame star. I recommend his early recordings, including the stunning Cuban Jam Sessions in Miniature (1957).

Ibrahim Ferrer is one of the most famous Cuban singers of all time. He sang for Los Bocucos across four decades, as well as the Afro-Cuban All Stars, and Buena Vista Social Club.

Orphaned at 12, Ferrer started his singing career as a busker to earn his way. After years performing with Los Bocucos, he released his first studio solo album Buena Vista Social Club Presents Ibrahim Ferrer in 1999.

Watch the famous Buena Vista Social Club documentary to catch a glimpse of Ferrer’s personality, and to see him in action with the band.

La Lupe is one of the most famous female Cuban singers of all time. Covering boleros, guarachas, and Latin soul, her raw, passionate energy saw conservative audiences divided by her personality. She has been labeled the ‘Queen of Latin Soul.’

La Lupe was exiled to Mexico in 1962, before moving to New York. She explored a swathe of Latin genres, and achieved significant success with her wild Latin covers of English pop favourites, such as ‘Fever.’

La Lupe’s later years were somewhat chaotic. Despite her success, after retiring from music in the 1980, she ended up living in poverty. A lifelong, devout adherent of the Santeria religion, she converted to Evangelicalism after being healed at a crusade. She died in 1992 aged 55.

One of the most iconic figures in Cuban music, La Lupe’s character, soul, and explosive energy shine through her music. Truly one of the greats.

Compay Segundo is a Cuban musician famous for his trova songwriting and guitar playing.

Born Máximo Francisco Repilado Muñoz Telles, Segundo was known affectionately as ‘Compay.’ The name comes from the Spanish compadre, and refers to his role as the second voice in the famous Cuban trova duo Los Compadres. The duo, led by Lorenzo Hierrezuelo, is one of the best known Cuban bands of the era.

In the Buena Vista documentary, Compay predicted that he would live to 115. Unfortunately, he passed away in 2003 aged 95.

Daymé Arocena is an Afro-Cuban singer based in Havana. Born in 1992, she has already reached the status of one of the most celebrated living Cuban musicians of all time.

Widely regarded as a musical prodigy, Arocena studied both Western classical and Cuban music. Her music is also influenced by her roots in the Santeria religion – a hybrid Cuban religion that blends elements of Yoruba spirituality and Catholicism.

At age 14 she became the lead singer for the big band outfit Los Primos. After being awarded a platform on Gilles Peterson’s 2014 Havana Cultura Mix: The Soundclash! Arocena went on to release her debut album Neuva Era in 2015. The record was critically acclaimed.

She has since released two more albums – Cubafonía (2017) and Sonocardiogram (2019). One of the most famous female Cuban singers, and indeed one of the most important Cuban musicians of all time.

Rubén González is a Cuban pianist who has been credited with forging the distinctive Cuban style of piano that came out of the 40s, along with Lilí Martínez and Pedro Peruchín.

Widely considered as an innovator of son cubano piano, and one of the grandfathers of Afro-Cuban jazz, González’s style has been described as ‘romantic and angular.’

He came out of retirement in the 90s to play with the Afro-Cuban All Stars and Buena Vista Social Club, before his death in 2003 aged 84. Make sure to listen to his 1997 solo album Introducing Rubén González.

Emilio Estefan is one of the best-known and most celebrated Cuban musicians of all time. He is best known as a member of the band Miami Sound Machine, and for his role in popularising crossover Latin music in the US.

Miami Sound Machine featured both Emilio Estefan, and his wife, Gloria Estefan. The band, whose sound was heavily influenced by both Cuban influences and North American pop music, had a string of hit singles in the 80s.

Emilio Estefan is also known for his seminal work as a producer. As well as supporting his wife’s success, Emilio has been credited for his part in the rise of other major Latin crossover artists, including Ricky Martin, Jennifer Lopez, and Shakira.

He has received a staggering 19 Grammy Awards, and was presented with the Presidential Medal of Freedom by Barack Obama in 2015. A legend of the Cuban music scene.

Based between London and Havana, Eliane Correa is a Cuban singer and pianist. She was  classically trained at the Luxembourg Conservatoire, before studying further at the renowned Instituto Superior de Arte in Havana.

After moving to London, Correa rose to recognition as the bandleader of the alternative Latin band WARA. She has since been involved with an immensely broad range of projects.

Recent years have seen Correa go from playing keys on The World of Hans Zimmer, to the directing the music for West African-inspired show Do You Speak Djembe, to singing on a soul jazz project with En El Aire Project.

One of the most promising young female Cuban artists today, Eliane Correa is someone who should be on the radar of every Latin music fan.

Omara Portuondo is one of the most famous female Cuban singers of all time.

Since the 40s, Portuondo was known as a star in Cuba, recognised primarily for singing boleros. She was a founding member of the vocal trio Cuarteto d’Aida, and a member of the all-female Orquesta Anacaona. She was also a dancer in groups including the Cabaret Tropicana.

In 1996 she became part of the Buena Vista Social Club, which brought her music to a worldwide audience. In 2009, she won a Grammy award for her album Gracias. In 2019, she was awarded with a Latin Grammy Lifetime Achievement Award.

Portuondo sang on the world-changing 1996 Buena Vista Social Club album, and remains part of the group to this day. A legend of Cuban music.

Gloria Estefan is a Cuban-American singer, who has been referred to as the ‘Queen of Latin Pop.’ Achieving over 75 million record sales, she is one of the best-selling female singers in history.

Her song ‘Conga’ with Miami Sound Machine was her first major hit, and was followed by a string of chart toppers, including ‘Rhythm is Gonna Get You,’ ‘Don’t Wanna Lose You,’ and ‘Party Time.’

Her 1993 Spanish album Mi Tierra won the Grammy Award for Best Tropical Album. She went on to win two more Grammys, and has received stars on both the Hollywood and Las Vegas Walk of Fame.

Along with her husband, Emilio Estefan, Gloria has been credited with paving the way for a number of Latin-crossover and Latin-influenced pop stars to find worldwide success.

Benny Moré was a Cuban singer and bandleader. He is regarded by some as the greatest Cuban singer of all time.

Moré first achieved success as a member of the trova group Trío Matamoros in the 40s. After touring in Mexico, he moved to Mexico for some years. He returned to Cuba in the 50s forming the Cuban big band Banda Gigante. Banda Gigante became one of the most successful big bands of the era.

The eldest of 18 children, Moré’s early life was not easy. He allegedly built his first guitar age six, and played bars and cafés until he joined the band Conjunto Cauto.

Despite being a singer first and foremost, Moré was known as El Bárbaro del Ritmo – the ‘barbarian of rhythm.’ Moré struggled with alcoholism, and in 1963 at the age of 43. In 1999, he was inducted into the International Latin Music Hall of Fame.

Celia Cruz was a Cuban-American singer, who was known internationally as the ‘Queen of Salsa.’ Starting out as a guaracha singer in Cuba in the 50s, she went on to be closely associated with rumba, son, and salsa especially.

She is known for her catchphrase azucar (sugar), which she uses in many songs.

The Cuban Revolution saw the nationalisation of the music industry in 1961. Cruz was exiled to Mexico, and she and became a prominent public figure. She continued performing in Mexico, before moving the US where she rose to international fame.

Cruz reinvented herself and as part of the 80s and 90s Latin crossover movement she was associated with artists like Gloria Estefan and Emilio Estefan.