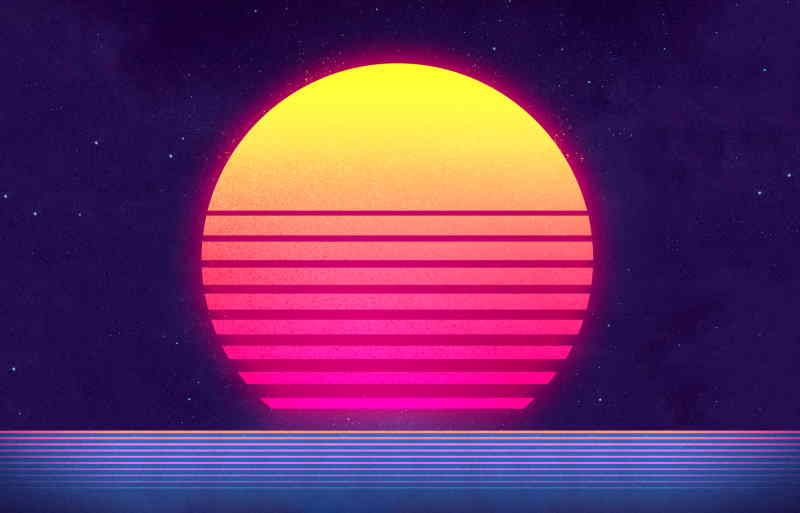 A swathe of new synthwave artists and fans poured into the space in the late 2010s, following the genre’s gradual emergence in the late 00s.

Synthwave, also known as outrun, is an electronic music genre that evokes certain sounds and aesthetics of the 80s. Often touching on themes of retrofuturism and cyberpunk, recent years have seen the music and aesthetic showcased in films like Drive (2011) and the Stranger Things series.

Dive in to learn about 20 of the most-influential and best synthwave artists from the past two decades.

The Midnight are arguably the biggest name in synthwave. Since the release of their seminal 2014 EP Days of Thunder, The Midnight have risen to become one of the most-respected and most-loved synthwave artists in the world.

The duo is comprised of American singer Tyler Lyle and Danish producer Tim McEwan. The pair have stated that they were inspired by the soundtrack to the 2011 film Drive, which sparked widespread interest in the sonics of synthwave.

Blending pop hooks with lush, pulsing synth atmospheres, their whole discography is worth checking out. Try their 2016 album Endless Summer for a taste.

One of synthwave’s advance guard, Mega Drive is a mainstay of the synthwave scene. Based in Dallas, Texas, Mega Drive’s brand of dark synthwave or ‘dark synth’ was driven home with his 198XAD album (2014).

The dark, sci-fi and horror inspired record was regarded by many as visionary. In 2019, Mega Drive finally dropped the sequel, 199XAD – an epic, dystopian adventure in dark synth. Essential darkwave listening.

FM-84 can be credited with bringing synthwave to a wider audience, thanks to their 2016 hit ‘Running in the Night.’ Capturing 80s nostalgia with a big smooth neon glow, FM-84 encapsulate the retro West Coast sound that most people associate with synthwave.

The solo project of Scottish artist Col Bennett, vocalist Ollie Wride is a regular fixture in FM-84 releases, featuring on a number of tracks. Check out the blissful 2016 album Atlas.

Canadian-French Wayfloe burst onto the scene in 2015 with their explosive deep house single ‘Echoes.’

Their 2019 debut album ‘Neon West’ and the 2020 follow up ‘Neon West Zero’ showcase lush, synthwave and retro-pop production, completed with vocals from a host of singers including Jessie Frye, Violette Wautier, and Rebecca & Fiona.

Scandroid is the synthwave project of LA artist and producer Klayton. Blending synthwave, darkwave, and retro pop, Scandroid draws on a diverse palette, offering an accessibility that has led him to be described as a gateway for the synthwave genre.

Scandroid’s atmospheric, retro sci-fi sounds are showcased brilliantly on the 2017 album Dreams of Neo-Tokyo. Check out that record as well as Dance with the Dead’s ‘Neo-Tokyo’ hit remix.

Comprised of former members of pop-rock group Fightstar, British synthwave band Gunship have unsurprisingly become one of the genres most popular bands. But they are no pop sellouts.

Fully embracing 80s retrofuturism, Gunship have been credited with advancing the genre with their vocal-heavy brand of synthwave. Check out the big nostalgic synth sounds of their hit ‘Tech Noir’ and their impressive 2015 self-titled album.

Kavinsky is synthwave royalty. The alias of French DJ Vincent Belorgey, Kavinsky’s 2010 single ‘Nightcall’ was huge – thanks in part to featuring in the 2011 film Drive.

His sophomore album OutRun (2013) was equally impactful. Indeed, OutRun became an alternative name for the synthwave genre thanks to Kavinsky.

After a hiatus of several years, Kavinsky finally dropped his third album, Reborn in 2022. If you (somehow) haven’t already heard it, check out ‘Nightcall.’ If you like Kavinsky’s sound, get stuck into Reborn for big retrofuture atmospheres.

Carpenter Brut is not for the faint-hearted. The project of French producer Franck Hueso, Carpenter Brut is one of the best-known darksynth producers in the world, mixing electronic synth music with a heavy dose of metal and a horror aesthetic.

According to Hueso, the ‘Carpenter Brut’ was originally a joke, derived from the name of the film composer John Carpenter, and the champagne Charpentier Brut. Give it a listen, and it will make sense –  a radical aesthetic indeed.

Give ‘Roller Mobster’ a spin to hear Carpenter Brut do what he does best.

The project of French producer James Kent, Perturbator is a dark synthwave artist. Formerly a black metal guitarist, his music was initially inspired by cyberpunk anime films such as Akira and Ghost in the Shell.

Perturbator’s 2014 album Dangerous Days was his breakthrough synthwave record. However, his 2021 album Lustful Sacraments sees Perturbator take a more industrial direction, drawing heavily on goth and techno, and, at moments, harking back to his black metal days.

Dark and impressively brooding, it’s a few strides removed from the glimmering neon sounds more frequently associated with synthwave. Definitely worth checking out.

Waveshaper has stayed true to the origins of synthwave perhaps more than anyone else. The Swedish musician whose real name is Tom Anderssen bills himself primarily as a video game and film music composer, and listening to his music, you’ll see why.

His distinctive 16-bit style is uncompromisingly retro, fully embodying the sounds and the soul of the era. Check out the epic and lush ‘CRT Days.’ If you enjoy it, dig deeper with his 2012 album Mainframe.

Miami Nights 1984 is the project of Canadian producer Michael Glover. He is the founder of synthwave label, Rosso Corsa Records, which has seen him work with the likes of Mitch Murder and Lazerhawk and others.

Robert Parker was originally a classical pianist before discovering the Korg Polysix in 2009, and storming into the world of retro synth music.

Based in Stockholm, Sweden, Robert Parker’s music combines elements of synthwave and disco, and has seen him work with some of the biggest names in electronic dance music, including Justice, Hot Chip, and Underworld to name a few. Check out his euphoric hit ‘Running Wild.’

Dance With The Dead

Dance With The Dead is the project of two former metal musicians – and it shows. The California-based duo is formed of Justin Pointer and Tony Kim, and subtly channels metal influences through an epic synthwave aesthetic.

Their music is set to feature in Stranger Things 4, which may come as no surprise to fans of the band – their music is perfect for it. Check out their hit ‘Diabolic.’

Hailing from Edinburgh, Scotland, ALEX emerged from the underground techno scene to become a major player in synthwave music.

Drawing on elements of techno, EDM, cyberpunk and beyond, his aggressive, swirling textures stray to the more industrial end of darksynth much of the time.

Check out ‘ANTAGONIST’ for a taste of ALEX’s sonic extremes, and ‘AKUMA’ and ‘Game Over’ for more accessible listening.

Timecop1983 is the stage name of Dutch producer Jordy Leenaerts. Heavy on the nostalgia, Timecop1983’s sound sits firmly in the synthwave camp, building on fat analog synth sounds, and sometimes drawing in elements of dream pop.

His music has featured in various video games and films, including Grand Theft Auto V. Listen to his 2018 Night Drive for classic nostalgic synthwave sounds that very much conjure up the feeling of… well, a night drive. Pure, unadulterated synthwave atmospheres.

New York electronic producer Starcadian describes his singles as ‘ear movies’ and his albums as ‘original soundtracks.’ Drawing comparisons with the likes of Daft Punk, his unusual sound invokes sci-fi and fantasy aesthetics, and clearly has major dance floor appeal.

Starcadian’s sound combines eccentric, wild party vibes with elements of synthwave to create a sound that, despite being corny on the whole, is rather arresting.

Listen to ‘Dance or Die’ if you’re willing to fully enter into the madness of Starcadian’s world. Check out ‘He^rt’ if you’d prefer an easy ride.

Each release is accompanied by a visual element – but you can virtually see it already if you close your eyes. Serious cinematic sounds that totally indulge 80s nostalgia and cyberpunk. Check out his very much chrome-textured 2017 album Monochrome.

Danger is the alias of French musician Franck Rivoire. After growing up in punk and jazz bands, Rivoire became involved in electronic production via Amiga and Atari computers which he used to make chiptunes. He began uploading his music to Myspace under the name ‘Danger.’

All Danger’s tunes are named after specific moments in time, whether times of the day or dates. Besides synthwave, Danger’s music shows a fairly heavy influence from French house, electro house, and witch house. His dark side project, Sunset, with Raphaël Siboni, is also well worth a listen.

Give ‘4:30’ a spin for a taste of Danger’s explosive, house-infused synthwave.

TOKYO ROSE has been credited along with ALEX for pioneering the darksynth subgenre with albums Akuma (2017) and Akuma II (2019), which both charted on Billboard. Both records saw TOKYO ROSE and ALEX collaborate on every track.

In 2020, TOKYO ROSE announced that he will be leaving retro synth sounds behind, with the goal of being less limited by a single genre. He has mentioned an interest in dubstep and drum and bass for future releases.

The Bad Dreamers is the alias of LA-based artist David Schuler. Blending nostalgic synthwave sounds with contemporary pop, The Bad Dreamers has delivered vocals on collaborations with some of the biggest artists in the genre including FM-84 and Timecop1983.

As well as those big collabs, The Bad Dreamers’ solo albums are totally worth checking out if you’re inclined towards more vocal-led, pop-friendly synthwave.

Give his single ‘Back to You’ with Timecop1983 a spin. If you enjoy it, then dig deeper into his sound with the 2021 album Space and Time..

11 French Rappers You Need To Hear

20 Newcastle and Gateshead Bands You Need To Hear