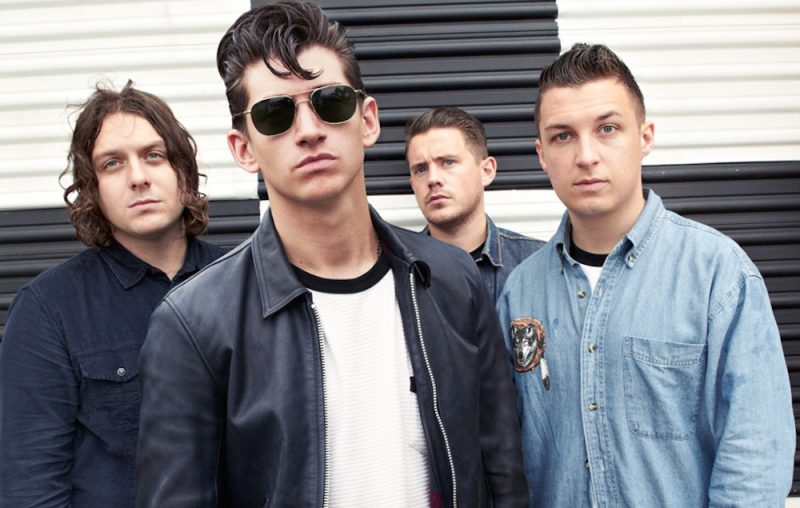 If the Arctic Monkeys’ sound continues to hit your sweet spot, then this list may provide more sonic satisfaction. Formed in 2002, Arctic Monkeys have released six studio albums, spanning twelve years from the fizzing electricity of an untamed youth in Whatever People Say I Am, That’s What I’m Not to the futuristic slow jams of Tranquillity Base Hotel & Casino. Their sound is anything but stagnant.

This list features bands which reference various stages of the Arctic Monkeys evolution. With the release of Whatever people Say I am, That’s What I’m Not (2006), Arctic Monkeys took the internet by storm, eventually catapulting their debut album into being the fastest selling in UK chart history and winning Best British album at the 2007 Brit Awards.  That was just the start of the journey.

The Kooks are the poster boys for the indie rock sound which Arctic Monkeys do so well. Emotive lyrics while maintaining the typical rock band routine is something that The Kooks have mastered. Songs from the album Inside In/Inside Out (2006) provide substance for this argument.

Classic songs like ‘She Moves In Her Own Way’ and ‘Naïve’ are definite crowd pleasers. They seem to me to be their versions of the Arctic Monkeys’ ‘R U Mine’ and ‘When the Sun Goes Down’. Driving and passionate, they really are two excellent songs.

Acoustic songs like ‘Seaside’ and ‘Tick Of Time’ have a slower feel, adopting the roles of ‘Only Ones Who Know’ from AM’s Favourite Worst Nightmare (2007) and ‘Despair in the Departure Lounge’ from Who The F*** Are Arctic Monkeys (2006).

With some similarities to the Kooks, The Vaccines music touches on an array of Arctic Monkeys works with indie electric guitar vigour. The band’s first album, What Did You Expect from the Vaccines (2011) harks back to Arctic Monkeys’ first album with its intensity and overdriven textures. There’s a definite cross over in the fan base.

Opening for bands such as the legendary Rolling Stones and Arctic Monkeys themselves, the success of The Vaccines’ debut album – a double-platinum best seller for 2011 –  highlights the breadth of their appeal. All five studio albums from 2011 through to 2021 are well worth listening to.

There is a constant shift of sound throughout Blossoms’ albums from the peppy Brit-Pop of Charlemagne, to moody organ work on Like Gravity, a concept notable in all the Arctic Monkeys albums, especially AM (2013).

Success followed The Libertines when they joined the scene in 2002 alongside The Strokes and Vines, ultimately resulting in NME crowning them as the best new band in Britain after their debut 2002 single, ‘What a Waster.’

The Libertines have a very distinct sound with those sketchy vocals throughout all their releases, most notably the album Up the Bracket, (2003) adding to the charm of the once young lads going large. The album’s sound is very early Arctic Monkeys, with expertly crafted riffs and the production that deliberately includes excess distortion and slightly-off vocals. The song ‘Time for Heroes’ is a prime example.

The self-titled album The Libertines (2004) follows the same recording style which paved the way for Arctic Monkeys Whatever People Say I Am, That’s What I’m Not. While the lyrical content is outside of the teenage mischief and drunken brawls that Arctic Monkeys phrase so well, both Pete Doherty and Caral Barat bring their own poetic charm.

Big Thief boast a phenomenal discography, with touching, well-crafted songs throughout all five of their albums.  The band takes a minimal approach to their music on a number of songs from the album Masterpiece (2016). Songs like ‘Paul’ and ‘Masterpiece’ both convey their message through just Adrianne Lenker’s vocals and a gentle backbeat which swells and dissolves constantly.

Masterpiece relates to the Arctic Monkeys’ Suck it and See (2011), with its spurned love-focused guitar ballads through ‘Love is a Laserquest’ and ‘She Thunderstorms,’ accompanied by the typical AM driving drum beats and progressive intensity. One of the great rock bands of recent years, who will be of interest to many Arctic Monkeys fans.

Formed in 1998, The Strokes’ first album release Is This It (2001) proved to be a raging, multiplatinum success. Iconic tracks ‘Last Nite’, ‘Is This It’ and ‘Someday’ are high energy indie anthems with strong connections to Arctic Monkeys’ sound.

The band’s sophomore album  Room on Fire (2003) was another genuine success, pushing the band more into the mainstream. With songs like ‘Reptilia’ and ‘What Ever Happened’ being the most well known, their indie rock intensity continued, with the brash vocal style of Julian Casablancas maintained.

The Strokes almost certainly paved the way for the vocal style of Alex turner in earlier Arctic Monkeys albums such as Favourite Worst Nightmare (2007) and Whatever People Say I am, That’s What I’m Not.

While black midi’s sound is incredibly experimental, the enthusiasm and intelligence in their turn of phrase will appeal to fans of Arctic Monkeys’ later work. Their 2021 album Cavalcade demonstrates the extremities of the band’s sound,from softer moments drenched in psychedelia to aggressive punk sounds.

A great band for those who appreciate the Arctic Monkeys’ more boundary-pushing moments, and essential band on the UK rock scene today.

Yard Act’s  2022 album ‘The Overload’ offers a fast, punkish sound that will appeal to fans of Arctic Monkeys’ Whatever People Say I Am, That’s What I’m Not. Songs like ‘Witness (Can I Get A) and ‘Dead Horse, are reminiscent of ‘Perhaps Vampire Is A Bit Strong But…’ and ‘When the Sun Goes Down.’

Yard Act songs like ‘100% Endurance’ offer emotional catharsis with a wonderful summation on the purpose of life. The track calls to mind moments on the  Arctic Monkeys’ Tranquillity Base  and the song ‘The Ultracheese’ especially, addressing the themes of success and how it changes lifestyles – a topic well-known to Alex Turner and his fans!

Bluesy duo Black Keys create some phenomenal riffs that could become staples for your ‘Big Riffs’ playlists! Songs like ‘Lonely Boy’ and ‘Howlin Boy’ from the albums El Camino (2011) and Brothers (2010) demonstrate this superbly.

While the Arctic Monkeys sound is more indie rock than the Black Keys’ bluesy tones, there are strong similarities in the iconic riffs between these two bands. While the entire Arctic Monkeys discography is filled with anthemic songs and iconic riffs, the Black Keys will be a good match for fans of the album AM and songs like ‘R U Mine’ and ‘Why’d You Only Call Me When You’re High?’

One of the stand out bands of the 00s indie scene that spawned the Arctic Monkeys, Kasabian have created a handful of memorable songs with some outstanding riffs. Arctic Monkeys fans will no doubt be aware of this band already, and fans of their early sound should definitely dig into Kasabian.

The songs ‘Fire’, ‘Underdog’ and ‘Club Foot’ from the albums West Ryder Pauper Lunatic Asylum (2009) and the self-titled album Kasabian (2004) meld together great riffs with catchy lyrics, calling to mind  to the AM album, and songs like ‘Snap Out Of It.’

The structures and conventions of indie rock allows for bands to go in all sorts of directions, creating  a cross over in fan bases between bands that share certain fundamental similarities, even if they appear superficially quite different.

Arcade Fire’s early works follow a more experimental route while still holding true to the indie rock sound. This makes them a great band for those who appreciate the Arctic Monkeys’ more complex songs.

Arcade Fire’s wonderful ability to meld chaotic sounds and complex rhythms has links to Arctic Monkey’s Tranquillity Base. The 2004 album ‘Funeral’ is a phenomenal alternative record for those interested in Arctic Monkeys’ more progressive and experimental moments.

The Clash are amongst the iconic figureheads of the punk movement. Cited as an early influence of the Arctic Monkeys, there are clear similarities in terms of song-writing and structure. And besides that, The Clash are one of those bands you simply have to know about.

The Clash’s classic 1982 album Combat Rock features classics such as ‘Rock the Casbah’ and ‘Should I Stay or Should I Go’. The unmistakable 1979 London Calling is the other essential record from this legendary band.

If you like the Arctic Monkeys, but have not yet got into The Clash – make that record your starting point. There’s simply no excuse not to listen to The Clash!

Combining elements of country, folk and indie rock, The Coral are one of the most successful bands of the 00s indie revival. Their debut, self-titled album in 2002 was nominated for the Mercury Music Prize the day after its release, with good reason.

The Coral offer a lot that will appeal to Arctic Monkeys fans, strongly evoking the alternative indie pop sounds of the Arctic Monkeys’ early days in upbeat singles like ‘In The Morning’ and ‘Skeleton Key.’ A guaranteed win for fans of early Arctic Monkeys, with some fantastic, enduring hits.

The Kinks are  underappreciated gems of the 60s, whose influence on music can easily be traced through to the sounds of the Arctic Monkeys. Despite not quite matching the phenomenal success of bands like The Rolling Stones or The Beatles, the Kinks nonetheless  gained five top 10 singles on the US Billboard chart, with nine of their albums charting in the Top 40.

Their self-titled 1964 album contains classic hits including ‘You Really Got Me’ and ‘All Day And All Of The Night’, and is a great entry point for this iconic band. Essential listening for anyone who wants to dig into the origins of Arctic Monkeys’ distinctive sound.