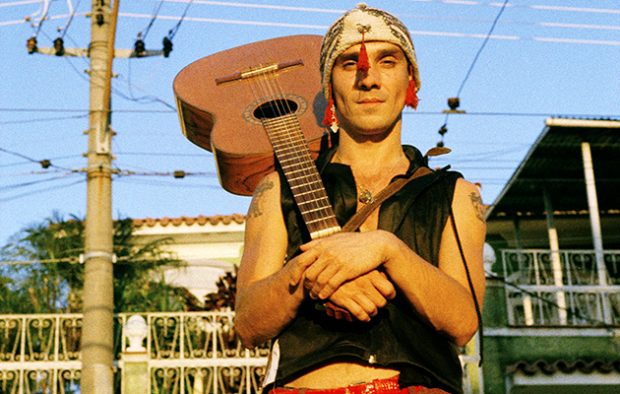 This list of tropical tunes and beach songs are guaranteed to deliver good vibes. Featuring a mixture of classic songs and rare vintage tunes from the tropics, these are the best songs for a heat wave, wherever you are in the world.

Get a piña colada in your hand and turn those speakers up! Scroll to the bottom for a link to the full Spotify playlist containing all these tunes.

Record producer Will Holland – better known as Quantic – has mastered the art of blending authentic tropical sounds with dance music. Working closely with artists from around the world, his album Curao (2017) with Afro-Colombian singer Nidia Góngora is one of his best.

A reggae classic, Sister Nancy’s ‘Bam Bam’ carries a stunning hazy summer atmosphere that’s guaranteed to take you to a happy place. Hailing from Kingston, Jamacia, Sister Nancy is a legend of dancehall and reggae.

First released in 1982, ‘Bam Bam’ is one the greatest reggae songs of all time, guaranteed to provide tropical island vibes wherever you are.

Pop on his cheeky 1998 album Clandestino for a whole 45 minutes of musical good times. ‘Desparecido’ is one of the best beach songs of all time.

You may not recognise the title, but you will instantly recognise this classic summer song as soon as you hear it. Jorge Ben Jor’s is the original rendition of this Brazilian bossa nova masterpiece that was immortalised in a Nike advertisement.

If you enjoy the track, check out Jorge Ben Jor’s 1963 album Samba Esquema Novo where the track comes from. Essential for any summer playlist for those sophisticated tropical rooftop bar vibes.

Legendary Ghanaian musician Pat Thomas has made African highlife music famous around the world. The career of this brilliant singer and guitarist has spanned decades, and some of his best releases have come in recent years. ‘Gyae Su’ is a beautiful, lilting highlife tune that’s perfect for the beach.

Check out the whole of his 2015 album with Kwashibu Area Band, which comprises non-stop sweet highlife grooves like this one.

‘Que tal America’ is a vintage Latin-disco banger from 1970s Belgian trio Two Man Sound. The samba-influenced ‘Que tal America’ became an underground disco classic in parts of the US for a good reason.

Hailing from the Caribbean island of Haiti, Scorpio Universel provide the most authentic island vibes you’ll find with their psychedelic afro-latin sounds.

This classic song from Toots and The Maytals is an all-time vintage reggae and rocksteady classic, and one of the first songs that helped reggae catch on outside of Jamaica. The song title and lyrics refer to Fred “Toots” Hibbert’s time in prison for possession of marijuana.

The Beach Boys are best-known for their pop hits and surf songs like ‘I Get Around,’ ‘Good Vibrations,’ and ‘Surfin’ USA.’ However, for those in the know, their 1966 Pet Sounds album shows a much mature sound, whilst retaining their summery feel-good vibes.

Showcasing elements of Congolese rumba and soukous, this unusual track is really one of a kind, with it’s heady, sunshiney atmosphere. The title means ‘I don’t drink much,’ and it’s guaranteed to get you moving whether you drink or not!

The legendary Cuban Buena Vista Social Club rose to fame partly thanks to the documentary by the same name. Their 1997 self-titled album beautifully captures the Cuban island vibes of these legendary Cuban musicians who so effortlessly produce some of the best tropical songs the world has ever known.

‘Chan Chan,’ which opens the album, captures the slow and steady pace of Caribbean life, necessitated by those intense simmering summers.

Pelota (Spanish for ‘ball’) is a little latin excursion from the brilliantly groovy and psychedelic three-piece Khruangbin, who have been rising to worldwide fame in recent years. The band expertly blend elements of latin, dub, and psychedelic music.

With their sophisticated and saucy guitar licks and perfectly-paced drums and bass, Khruangbin know how to create those lilting rhythms that hit so sweetly in the summertime. Pelota is a perfect example.

Jamaican guitarist and composer Ernest Ranglin is known for his masterful blend of reggae and dub with jazz and blues. No one in the world has managed to blend these genres the way this man has, and the effect is brilliant.

Check out his 1996 album Below the Bassline which contains the track ‘Surfin’,’ with it’s fat, slow groove that provides guaranteed good vibes.

The King of Afrobeat, Fela Kuti is one of the most-influential African musicians of all time. His mighty afrobeat ensembles with their big brass tunes and irresistibly danceable rhythms make for perfect summer listening.

From its iconic opening to the first vocal (which doesn’t come in until 4:28), ‘Water No Get Enemy’ is one of Fela’s best-known tunes, and it’s an essential one for any summer playlist. The lyrics explore the importance of water both politically and metaphorically, with lyrics in a mixture of Yoruba and pidgin English.

15.We Live In Peace, Marijata

The 1976 album This Is Marijata showcases their unique organ-heavy blend of afro-funk and psychedelia, which is perfect for creating those carefree, chilled beach vibes.

Quantic takes you on a trip to the Colombian coast and deep into the sounds of cumbia music this perfectly chill summer tune.

This track showcases the rhythms and sounds of traditional cumbia music – a form of South American folk music which takes form in most South American countries, but is especially popular in Colombia and Panama. The track title which translates as ‘Cumbia over the sea’ is perfect beach music.

Sailing back to the island of Cuba, Israel ‘Cachao’ López is credited as the man who introduced Cuba to the African rhythms that developed Cuban danzón into mambo. Cachao also speadheaded the descarga jam sessions – late night sessions that saw Afro-Cuban music develop into vast new forms.

His album Cuban Jam Sessions in Miniature: Descargas will educate you with the stunning afro-latin rhythms developed on the Caribbean island that has been so important for music worldwide.

This big afrobeat and afro-fusion tune from Nubiyan Twist, featuring the vocals of the amazing K.O.G is guaranteed to bring the party levels up at any summer gathering.

Combining simmering summer vibes with epic energy levels, the synergy between Nubiyan Twist and K.O.G is the stuff of unforgettable summer festivals.

Return to those sophisticated Brazilian beachside bars with the bossa nova legend Antônio Carlos Jobim. The title track from his classic 1967 album Wave captures the stylish and chic vibes of São Paulo and Rio de Janeiro.

‘Wave’ recreates the sound of white sand and glimmering, resplendent blue Brazilian sea views. Perfect music for the beach, anywhere in the world.

20. Could You Be Loved, Bob Marley & The Wailers

No summer playlist could be complete without featuring Bob Marley, the best-known reggae singer of all time. First released in 1980 on Bob Marley & The Wailers final album Uprising, it is one of Bob Marley’s enduring classics, and an all-time reggae classic.

An all-time essential summer song that simply has to be included on any beach playlist.

A vintage classic, Los Silvertones’ 1969 single ‘Tamborino Swing’ captures the sound of Panama. A tropical island with a unique contribution to music, this track has a simmering South American atmosphere.

You can almost feel the heat. Simple, minimal drums and bass support an infectious, reedy brass line that will drive you loco! A true hidden gem of a tropical island song.

Manu Chao’s songs are so perfect for the summer that it’s hard to resist putting him on this more than once. His carefree, summery sounds make it hard to care about anything than relaxing in the sunshine.

The cheeky ‘Bongo Bong’ is another big hitter from his Clandestino album.

This absolute scorcher captures the simmering sounds of Colombia’s Caribbean coast like no other.

Featured on the fantastic compilation album Cartegena! Curro Fuentes & The Big Band Cumbia and Descarga Sound of Colombia 1962-72, the zany, nostalgic big band sounds are hard to resist. And why would you? Like the ‘coconut rice’ mentioned in the song, this is another one to make you loco.

Staying in Colombia, the stunning Ondatrópica is a collective led by Mario Galeano and Quantic. Their self-titled 2012 album features some of the best big band cumbia you can find, and it’s absolutely overflowing with the bustling energy of the Colombian coast.

Clanging, syncopated latin percussion with screeching brass solos to make your hair stand on end creates that live descarga jam session feeling to transport you right over there.

Wind things down with Brazilian bossa nova legend João Gilberto’s classic ‘Chega de Saudade.’ This legendary bossa track captures the sun-kissed sound of Brazilian bossa better than any other, and perfectly summarises the feeling of those long summer evenings.

If you’re feeling this, then listen the whole way through his 1959 album by the same name.

Remaining in Brazil for the bossa nova wind-down, this track from Brasil Aquarius’ beautiful bossa record offers some of the best in Brazilian jazz and bossa nova.

Listen to this full list of songs on our tropical songs Spotify playlist.