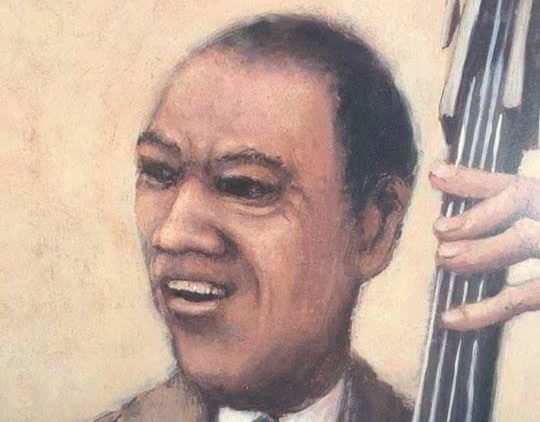 Jazz Music Stops is a reaction image and meme based on what might seem, at first blush, to be a fairly unremarkable painting. The image depicts a jazz musician, smartly dressed in a  playing an upright double bass and pulling a face of apparent disgust. The bracketed words (jazz music stops) in yellow are the only alteration to the original – at least in the original meme.

Where did it come from? The Origin of Jazz Music Stops

Meme scholars are in agreement that the image was first used as a reaction on 10 June 2017 on Imgur, appearing with the caption ‘Me Irl.’ The caption suggests it may have first been posted on the /r/meirl subreddit.

The Spread of a Disgust React

To me, the face depicted is probably a ‘stank’ face – the man in the picture is feeling the music, and actually reacted positively. But one of the joys of art is in the interpretation. And the internet, on the whole, seemed to resoundingly conclude that the face depicts disgust, as the images initial uses make evident.

On 3 September 2017, a few weeks after its first appearance, the meme started to gain traction after being added to the meme template archive Shitpostbot 5000. It later appeared on the /r/gamegrumps subreddit by u/ThatOneEskimo as a reaction to the thread ‘when Arin finally kills the last enemy in Sonic Unleashed,’ and received 99% upvotes.

On 16 October, Twitter user @mvgvn shared the image as a reaction to a conversation that ended with ‘Why you give me chlamydia?’, receiving over 600 retweets and 900 likes.

Then on 26 October, @imthrifter posted the meme on Instagram with the caption: ‘Black people: *drinks lean, does Molly, percs, xans* ayyyy lit *Someone does coke* Black people:’

Variations on a Theme

Not content to leave the depicted jazz man in peace, at length, the internet went to town with the image, with a number of common manipulations and variations cropping up. Some common ones include:

What else is it going to do, if it’s not going to stop?

On a similar theme as (jazz music gets stronger).

Not wanting to leave the Italians out.

What is the name of the Jazz Music Stops Original Painting?

The name of the Jazz Music Stops original painting is ‘Cool Jazz’ by Fabrice de Villeneuve, a French painter born in 1954. I, for one, would love to get my hands on a print of it, because it’s a classy painting.