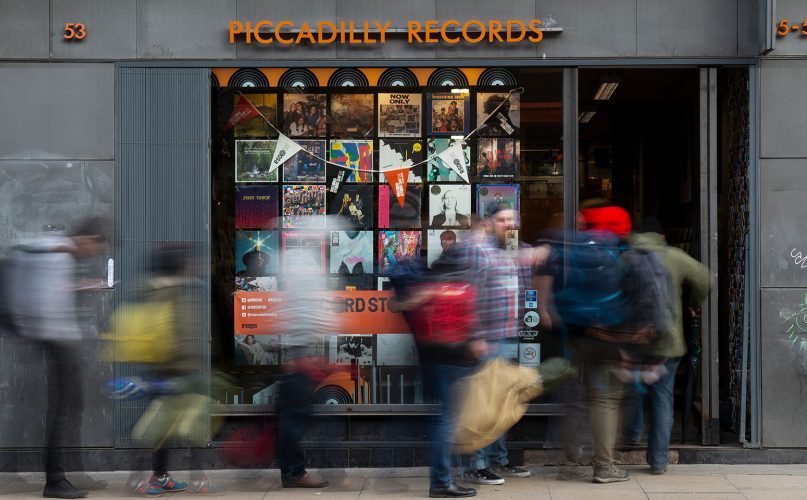 From post-punk to Britpop to acid house, Manchester has undoubtedly made its mark on the UK map of musical innovation. But where would Manchester music be without the humble record store? Many of the shops which prospered throughout the fertile years of the 80s and 90s are still standing today – despite facing off some major threats – and are now enjoying the recent boom in vinyl sales. Each of these record shops offer a unique experience, with their distinct genre specialisms and dedicated staff members who bear a collective wealth of knowledge. So whether you’re hungry for rarities, oddities, bargain bin bangers or the best new releases, you can rest assured one of the Manchester record shops listed below will satisfy your appetite.

This long standing institution first opened its doors in 1978, the very same year Factory Records came into existence. Since then it has seen the city through decades of cultural evolution and now remains firmly embedded within the local creative community. Peruse the racks here and you’ll discover a well curated selection of new releases and reissues put together by the shop’s knowledgeable team of staff. There’s something here for people of all genre persuasions, be it indie, punk, disco, minimal techno, hip-hop, jazz or anything in between. If you’re lucky you might even bump into a famous face while you browse – Tim Burgess, Johnny Marr and John Grant have all been known to frequent the shop. It’s also worth swinging by in the winter months to pick up their comprehensive End Of Year Review – arguably all you need for a year’s worth of musical education!

If you fancy doing a bit of digging outside of the city centre, hop on a tram to the lively suburb of Chorlton and give King Bee Records a visit. If you’re trying to scale back your collecting habit, however, be warned – it’s near impossible to walk away from this place empty handed! The knowledgeable and friendly staff keep a high-quality selection of (mostly) second hand records in rotation, covering a wide stretch of the genre spectrum. A trip to King Bee should prove particularly fruitful for fans of northern soul, reggae and funk – you could spend an afternoon poring over their top quality selection of 45s. Prices can range from 50p for bargain bin belters to £100+ for super rare stock, but thankfully most of what’s on offer here won’t burn a hole in your pocket.

If you’re on the hunt for some serious rarities, Vinyl Exchange should be high on your list of Manchester record shops to visit. This excellent shop (conveniently located just metres away from Piccadilly Records) is the largest buyer and seller of second hand and rare records in the north-west, and is held in high regard by collectors across the UK. For those unwilling or unable to part with serious cash there’s still plenty to get stuck into, with scores of reasonably priced new and second hand records on offer here. Genre-wise they’ve got pretty much everything covered and the staff are more than happy for you to pick their brains about their respective areas of expertise. It’s perhaps the only shop that manages to cover all the bases (new, used, rare and bargains) so head here if you only have time for one stop.

You can find Vinyl Resting Place nestled amongst an array of eccentric outlets on the top floor of Afflecks, the Northern Quarter’s alternative shopping mecca. VRP first began its life in Afflecks as a handful of racks helmed by current shop owner and record fanatic Alistair Hall. It’s since expanded into a fully-fledged record shop with a wide selection of second-hand records all cherry-picked by Al himself. There’s bound to be something here that’ll tickle your fancy, whether it’s jazz, soul, rock, disco or hip-hop. The friendly atmosphere and top-notch service make for an enjoyable digging experience, and you can always count on Al to impress you with an anecdote or two about whatever you bring to the counter.

SK1 is a relatively new Manchester record shop and café helmed by DJ and producer Joe McBride aka Synkro. It’s part of a burgeoning network of independent vendors who have opted to set up shop in Stockport’s Old Town, avoiding the increasingly unaffordable rent hikes in Manchester’s city centre. Since opening, they’ve hosted a slew of in-store performances, featuring the likes of Andy Votel, Robert Manos and Synkro himself. A quick snoop on their Instagram page reveals the breadth of what’s available in store, from Larry Heard to Bert Jansch via a wealth of obscure independent releases. There are also over a thousand records available to trawl through on their Discogs profile, but it’s really worth visiting the real deal if not just to soak in the relaxed vibe and knock back an espresso or two.

Eastern Bloc was first established in 1985 by John Berry and Martin Price of 808 State. Throughout the 80s and 90s the record shop was instrumental in exposing new dance music to the Manchester club scene, being one of the first in the UK to sell international dance imports. Nowadays, E Bloc remains the first port of call in the city for DJs seeking out high quality electronic music. It boasts a particularly strong selection of drum & bass and jungle records, and their selection covers techno, house, broken beat, electro, dubstep, disco, ambient, soul, funk, hip-hop, latin, afro, reggae, latin, jazz, and everything in between. Around lunchtime you can grab a tasty (and reasonably priced) bite to eat in the café-bar area downstairs while a soundtrack of atmospheric jungle and techno rolls in the background. The staff at E Bloc also regularly host free events in the bar area, featuring some of the best underground talent from Manchester and further afield.

Tom Houghton of Microdosing initially founded All Night Flight as an appointment only affair in his flat alongside running the occasional pop-up shop in Partisan Collective and the like. Within the last few months it’s successfully taken up permanent residence in Stockport, becoming another welcome addition to the SK1 community. Here, customers are treated to what is arguably the most nuanced Manchester record shopping experience on offer. Instead of scattering a handful of gold dust amongst stacks of mediocre records, Tom does all the digging for you. Each record is carefully considered, remarkably obscure and falls within the realms of “left-field, experimental, electronic and worldwide sounds.” The tasteful record selection is mirrored by the subtle minimalism of the shop’s interior decor, which together create a soothing environment for you to lose yourself in for an afternoon.

You can clock this quirky emporium from a fair distance thanks to the bric-a-brac piled high in the shop window and the ever-present stereo by the entrance (usually blasting out classic pop to unsuspecting passers by). Wander downstairs and you’ll find yourself amongst an abundance of curios – toys, comics, tapes and trinkets occupy every square metre of this joint. Watch your step, however, or you might end up face to face with some vintage porn magazines – and a chuckle or two from behind the counter! In keeping with the rest of the shop, the record section is somewhat chaotic and mostly populated by dusty charity shop regulars, but if you put in a bit of work you can turn up some real gems here.

On first glance you might mistake Wilderness for just another chipboard-clad hipster joint with a swiss cheese plant in the corner and some sour IPA in the fridge. But this place has more to it than the latest can of Cloudwater. Carrying on the torch from previous occupants Deco Records, it operates as an all in one café, bar and record shop peddling a mixture of new and used records. Their selection is small compared to the others on this list, but worth flicking through for essential indie new releases and their dedicated section for up and coming musicians. Even more worthwhile is their regular series of free in-store gigs which often feature stalwarts of the local music scene such as Francis Lung, Rosey PM and Aldous RH.

While gentrification slowly creeps south of the city centre, Sifters remains a well-preserved piece of Mancunian history. Shop owner Pete Howard has even been immortalised in the lyrics of an Oasis song – “Mr Sifter sold me songs when I was just sixteen/Now he stops at traffic lights, but only when they’re green”. Thanks to the Gallagher bros Sifters has become one of the more popular Manchester record shops for music tourists, but it’s worth more than a quick once-round with a selfie stick. It’s the place to go if you want to bag some second hand rock and pop LPs (and the odd disco banger from the 12” section) for next to nothing. You’re unlikely to find any rarities in here, but you can also rest assured that you won’t be subjected to unwanted displays of one-upmanship from your fellow customer – record collecting chops should be flexed elsewhere.

Enjoyed this article? You may also like our guide to Manchester music festivals.