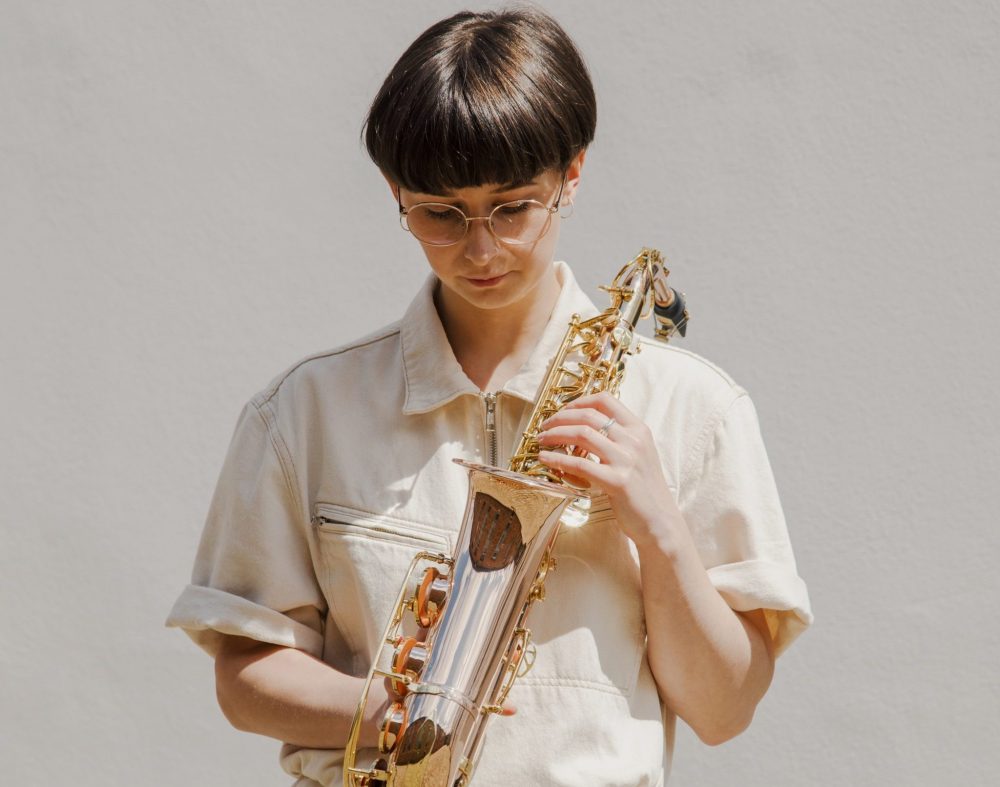 A jazz revival is happening in the UK. After spending many years as a symbol of wine-sipping middle-class civility, a new generation of music lovers are getting back the gritty, sweaty, passionate roots of the genre. The likes of London-based Brownswood Recordings and Gilles Peterson have been important to publicising the movement. But outside the capital, it’s clear that a distinct jazz scene is growing in Northern cities like Leeds and Manchester. One of several artists emerging artists at the heart of the Leeds scene is Jasmine. We spoke to her about her debut EP, her place in the movement, and being a woman instrumentalist in jazz.

This is an exciting time for UK jazz. Where do you fit in with it?

One thing that’s really exciting about UK jazz at the moment is that there’s so much variety within the scene, because artists are drawing influence from so many other genres. I think the same can be said for our music. We fit in with the growing amount of hip-hop that seems to be happening within the UK jazz scene. I think the way people view jazz is changing. It’s becoming a lot more accessible, and I feel like my music is a part of that change. I would compare my music to artists like Soweto Kinch. I’m really inspired by his music because he combines complex jazz harmony and melodies with heavy hip-hop grooves and electronics in a way that’s totally different to anything I’ve ever heard. The first time I listened to his album, Nonagram, I realised that was the sort of music I wanted to make. I like to think that the music we’re creating is different to other contemporary artists. For me it’s important that we have our own sound and I try to keep that in mind when I’m writing new music.

How did the project start?

I started the band when I was in my final year at Leeds College of Music. I met the others when I joined Têtes de Pois and we became really close, which is why I asked them to be a part of my solo project.

To be honest, before I formed the band I had no interest in leading a project, or writing my own music. The reason I set it up was because I needed a band for my final recital. I had also never composed music before, but thought it might be impressive to do an entirely original recital. It was after that that I realised how much I loved writing and performing my own music, so I carried on with the project after I graduated.

Light seems to be a big theme on your record. Tell me about that.

Bring to Light was the first thing I had ever released under my solo project, and I definitely felt as though I was showing people who I was for the first time as an artist. I think any artist that’s released their own music will understand how vulnerable and exposed you feel each time you release something, because it’s such a personal thing and you put so much energy into creating it, without really knowing what people will think of it. Releasing Bring to Light was the first time I had experienced that.

We also play with light and dark on the record. ‘Cold Sweat’ sounds quite sinister at the start and then goes into the heavy hip-hop groove. I love the contrast between that and all the luminescent tracks, which are so light and euphoric – but somehow they tie together so nicely. That’s one thing that I do think is quite unique about our music – there is so much contrast. I think it works because for anyone who’s watching us perform, it’s exciting to not know exactly what’s coming next and to even be surprised.

You’re based in Leeds, right? Tell me more about the city.

I think apart from London, Leeds has the best music scene in the UK, for jazz anyway. I love other cities like Manchester, which has a lot of cool stuff going on, and I love performing there, but for me there is just so much interesting music coming out of Leeds at the moment. I think studying here and knowing so many of the musicians here has made me very biased though. I would love to be more involved with the London jazz scene, which was one of my aims for 2020. One thing that I think is a shame is the separation between the London jazz scene and then the rest of the UK. I think there’s some amazing music happening in the north which doesn’t always get the credit it deserves. I don’t think I will always stay in Leeds, though. I’ve lived here my entire life and would love to try somewhere else.

Could you speak about the lack of women-led jazz groups? Why do you think this is, and how could it be changed?

I think there’s a lack of female instrumentalists in general. One reason might be that young women feel intimidated entering into such a male-dominated environment, where you have to put yourself in situations where you’ll be pushed out of your comfort zone. And on top of that I think female musicians are often underestimated or patronised by men, which can result in a loss of confidence.

I think doing more to encourage girls to get involved with music performance while they’re at school would be a good start. I do think it’s a really tricky subject though, and it’s hard to pinpoint exactly what’s causing it.

Is the jazz revival a fad, or is it here to stay?

I think definitely jazz is here to stay! There are so many great artists out there at the moment who are continuing to push the boundaries of jazz and create interesting and unique new music. I also think jazz is becoming a much more accessible genre and will only continue to grow in popularity.

What’s next for Jasmine?

I’m writing my debut album which will hopefully be released next June or July. Lockdown has given me a lot more time to focus on writing and this album has definitely taken a slightly different direction than I was expecting, but I’m really excited for people to hear it.