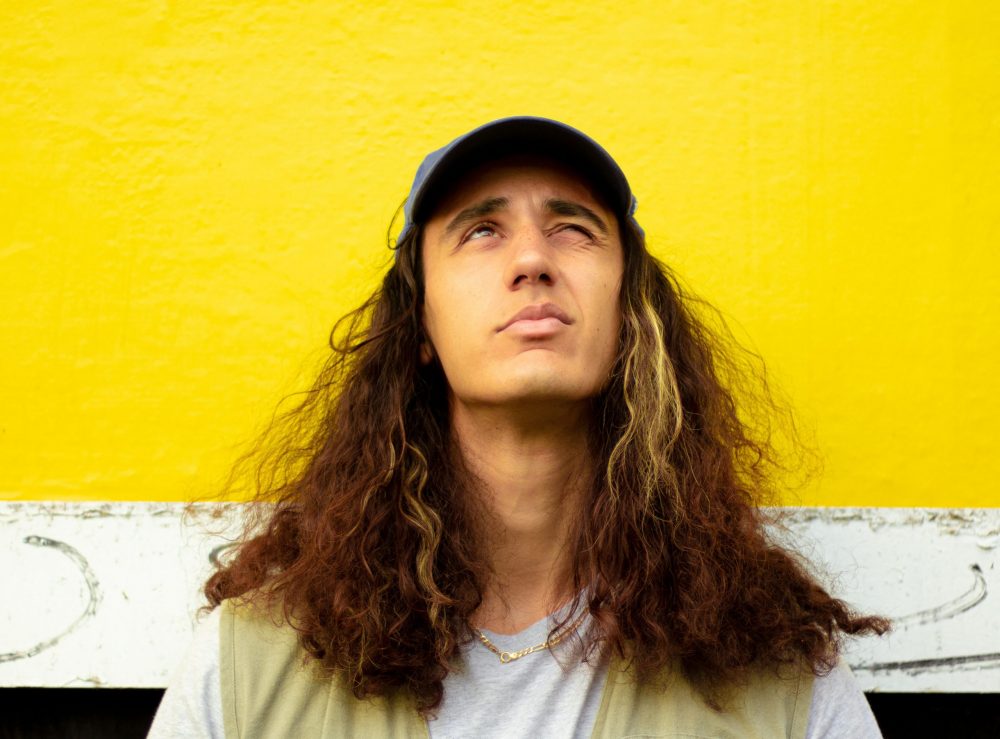 Yusuf Yellow takes things at his own pace. It hasn’t hindered his progress. With his debut album, The Yellow Tape, the Leeds-based hip-hop artist grabbed attention with his curiously gentle flows, and the candid vulnerability of his lyrics. Marching to the beat of his own drum, the young artist has resonated with an audience that’s more interested in self-expression than bravado. And that’s an audience that’s growing today. If you want proof of how far his appeal reaches, consider the fact that Yusuf now finds himself being featured by the likes of Nando’s. We caught up with the affably idiosyncratic rapper to learn more about him.

What’s the story of Yusuf Yellow?

It all started nearly two years ago with me simply writing down the things I struggled with. It then quickly evolved into poetry and then into rap. I then started rapping over beats I found online and put them on SoundCloud. I did this for the first year and performed the songs live as much as I possibly could to build up my name in Sheffield. On that journey, I met so many people that helped me develop as an artist and realise the type of artist that I wanted to be. I would name them all, but the list is too long. I then dropped out of my first year of psychology at Sheffield Hallam Uni after getting a 2:1 to study Electronic Music Production at Leeds College of Music with aims to develop my production skills and be in an environment surrounded by more musicians, as I realised that music needed to be my whole focus. All of the experiences I had and people that I met over those two years lead me to put together The Yellow Tape.

What are the main themes you explore in your music?

The themes on The Yellow Tape cover dealing with loneliness in a busy world, pressures of society, overthinking, self-development, self-value, relationships, toxic masculinity, and the little things I see and get up to on a normal day or night.

The first single made was ‘Sippin Tea’ which was produced by my good friend Oscar Blakey some time last summer. The rest of the project was written in a week when I was pretty unwell and could hardly leave my room. At first, I tried to write, but I was in too much pain to get up. On the third day, I managed to sit at my desk and start writing to a collection of beats made by my friend Jackie Moonbather. For the rest of that week, I reflected on all the things that were in my mind and put together this project.

The feature from LPJ in the song ‘Daps’ was a nice addition to the project, as he’s such a big part of my journey in music and was one of the first people to truly give me the confidence to rap. Also, the feature from Jackie Moonbather was so perfect to me because his energy was portrayed through all the beats and his vocal on ‘Cold Nights Up North’ made it like the beats finally came to life and understood me.

I truly couldn’t have done this without Jackie Moonbather and Oscar Blakey producing those beats and Jackson Swaby mastering. Those guys are just too sick, and I owe a lot to them.

What made you choose the name ‘Yusuf Yellow’?

Yusuf Yellow is the whole picture to me. Yusuf is my name ‘Joseph,’ translated into Arabic which represents my conscious self. And Yellow is everything that I’m yet to fully understand. It’s the feeling I get that either gravitates me towards or away from certain things and people without me knowing quite why. It’s the love and positivity I want to share despite it being hard to express, along with the drive to share my struggle, and the darker thoughts although they’re quite personal. Yusuf Yellow is my greatest form of therapy and self-understanding, and can sometimes feel like external guidance. That’s why my music is a true expression of what I either see or want to see happen. It’s been a journey so far finding my style and flow, but I feel like my vision is constantly getting much clearer and I hope to portray that in my music.

Yusuf Yellow is my greatest form of therapy and self-understanding, and can sometimes feel like external guidance

What’s going on with the tea thing? You seem to mention it in at least half your tracks.

I do love tea and you just can’t beat a good cuppa. It’s good for everything. But I think I’ve made it seem like I drink tea way more than I do. I have like two or three cups a day. But yeah, don’t sip lean, sip tea. Or do both, I dunno.

You mentioned toxic masculinity earlier. Can you tell me more about that?

Yeah, I have  an old poem I wrote before I started writing to beats. I used to perform it at open mic poetry events hoping that it might help some people. There’s actually a project from 2018 full of mypoetry on SoundCloud under my real name Joseph Alhallak. But yeah that poem was dear to me because it was reflecting a lot of the heavy struggles that I saw and still see around me. It goes like this.

What does it mean to be a man?
Must I keep quiet from the riot in my head
And determine my success on whether I make bread
Must I remove any emotion when I speak
Or avoid talking about love because that makes me weak
Must I only order certain drinks
Because god forbid, I buy something pink
I once got called queer cos I didn’t want a beer
Because that determines sexuality
That was kinda mad to me
Must I order the steak when I want a salad
Or make my writing a hard rap when I prefer it as a ballad
What does it mean to be a man?
See in 2018 in the UK
There were 6,507 suicides
And of that number 4,903 were men
This percentage of about 75 shows a high number of guys that could carry on their lives
But I’m sure that number would be
lower if they felt that they could share the struggles on their mind.
But when we struggle people say man up, be a man
Like that’s some sort of fool-proof plan
Because for some reason my gender means I must be a pretender
Well f*** you if that’s your response when I need someone to come to
These words don’t give you guidance man they just f***ing numb you
They make you wanna punch a wall
cos you can’t ask your friend
to hug you
They make you feel trapped in your head like you’ve got nowhere to run to
And you can’t cry cos that makes you weak
And you can’t speak cos you’re scared you’ll cry
This is why people die
So, I encourage everyone to express whatever is on their mind.
And after that, we’ll toast our pink drinks
And share a salad over my new ballad
Man, I wish I could live in a world where none of this s*** mattered
But I guess we can change it one by one
And educate our daughters and sons
So, remember
It’s not weak to speak
And if you’ve got no one to talk to Then you can always talk to me.

What do you think it says that Nando’s like your music?

I’m not sure to be completely honest, however I’d like to think that they feel as if my music and image could relate to enough people to make me worth being on their platform. And if that is the case then that gives me a lot of hope for the future, because my focus is mainly on honesty, openness and originality both musically and lyrically. And if that’s what a lot of people are drawn to, then we’re doing okay.

My focus is mainly on honesty, openness and originality both musically and lyrically… if that’s what a lot of people are drawn to, then we’re doing okay

What are my plans for the future, musically?

I’m currently working on a few new projects and some singles. I just want to keep developing and challenge myself to do things that haven’t been done. The Yellow Tape is just the start and I’ve got so much more that I want to share with the world.