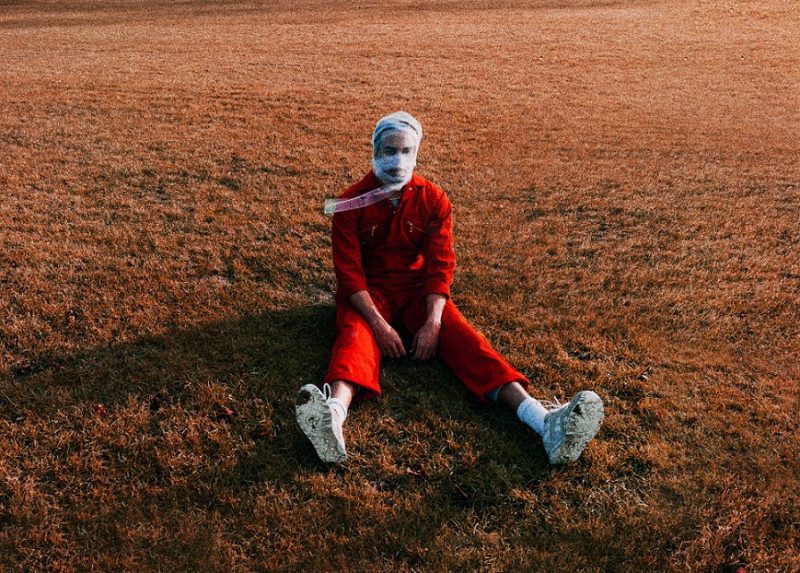 In Conversation
With…
Otis Mensah

In the over-saturated internet world, it can feel like everyone has a product to sell, a project to promote, and a message to preach. It can be hard to find the truly good art, when everything is packaged in such a glitzy manner, and it’s easy to feel overwhelmed by choice. I like to think of myself as an advocate of patience and sifting-through-the-noise, which is what led me to the unassuming excellence and creative genius of simon a. With a prolific catalogue of music visuals, a unique perspective on solipsism, millennial loneliness and nostalgia, and a boundary pushing zest for conceptualisation, production and songwriting, simon a.’s art means a lot. If you’ve not discovered it yet, maybe now is the time to jump on the train.We got together to chat about his creative journey and identity, and his project A Way To Go.

A lot of artists fuel their creativity by inventing personas. Is that the case for you or is you or would you say your art is a direct reflection of who you are?

I have a lot of things I want to talk about in my art. Some of the things might not directly be related to me. When I first started this project, it was less about me, and more about storytelling because I come from a film background. I studied writing, so it was about telling a story about someone who might not be me, but someone I would love to inhabit, personify, and exhibit.

The last project was a little more personal, but I think it’s best to keep things abstract as an up and coming artist. It makes it easier to allow other people to relate to you and for other people to jump on the train. At the moment there’s not that many people on the train. To be a little more relatable, I have separated the art from me and started talking less about myself, and more about emotions and turmoils in general. And I like that, anyway. I think it’s fun to draw parallels between all these people and the things that I’m feeling.

I think it’s best to keep things abstract as an up and coming artist. It makes it easier to allow other people to relate to you

I think if you’re making art, in general, whether it be for personal delight or if you’re a servant to the public, once you put it out there, in a sense it’s not only yours anymore – it’s become others’ and part of their lives. There are countless albums by artists who don’t even know I exist, but they become such an important part of my life without them personally having any particular stake in it.

You mentioned being from a film background. Your music, and the way it’s presented, does feel very cinematic. Could speak on that?

I studied film at university. It was my first choice for a career when deciding my path from sixth form. I thought, ‘yeah, I’m going to be a filmmaker.’ Obviously, things change, times change, people change. I might not be on that so much now, but I still have it in my DNA. If I make something, I want to showcase the tools I have. I like to have skills in multiple avenues. Like, having that ability to make a music video. It kind of ties me down, because it’s like, well, now I’ve got to do everything. But it’s also freeing, like, now I can do everything, you know? Film is in me and it seeps through the music, even when it’s not intentional. I’m a writer. When I craft lyrics I have that inbuilt storytelling mode.

I study so many things, not just film, though. I study artists, and look at what they do, and how they do things, and try to learn from them.

I’ve planned out my career quite meticulously to the point where I know everything that I’m going to talk about. I know all the albums I’m going to release, and I know what they’re going to be about.

I feel there’s a certain solipsism and millennial lostness throughout your music. In the song Grace you speak about it just being you and a dream. Could you speak on that?

The EP is kind of about feeling lost in general. As I was writing it I was in a rut. I didn’t really know where I was going. I know about the end goal and that’s where I’m going. But the one thing I don’t know is how the hell I’m going to get there or how that’s going to happen. I don’t know what that road looks like so there is a level of lostness. I think that’s pretty common nowadays. I feel like it’s easier for older generations to look down on young people for having no plans when they have already met their outcomes, it’s easier for people who have reached their end goal to look at people who are attempting to reach it, in a downward fashion like ‘hmm is it that hard? I’m already here. What are you doing?’ So there’s a pressure on us as millennials or Generation Zs to meet that standard of Generation X. But life’s getting harder for young people everyday. I feel this is something that older generations can’t grasp – they can not fathom that life is harder for younger people than it was for them when they were young. It’s pretty easy to get lost these days.

I feel this is something that older generations can’t grasp – they can not fathom that life is harder for younger people than it was for them when they were young. It’s pretty easy to get lost these days.

I think I understand why an older generation might find it so hard to fathom, because we’re at a stage in capitalism where we give off the illusion of ease. We’re so entrenched in our own comforts – we’ve got our JustEat, we’ve got our Uber, everything on layaway, everything on credit. Everything looks like it would be easier, but we want these things regardless whether we can financially manage, or even manage them on a mental, human level. We want to bathe ourselves in luxury as a means to console ourselves, so from the outside-in, it looks like we’ve got it easy. But I think there’s a lack of understanding for where it’s coming from – our lostness and our impulsivity. Does such a lostness relate to your mental health as a creative?

Hundred percent. It’s my main struggle right now – how am I going to get to where I’m going. To take care of myself I need to understand myself, and to understand myself I need to sit with myself. That’s how I handle it. Just me at 3am chilling here, and going ‘aye yo, what are we doing here?’ Sometimes I might cry –  aye it happens – it depends on what needs to get done. But I guess that reflects in the themes I’m trying to express. It’s how I handle myself, and how I handle my struggles and issues. It’s easy to suppress issues and tell yourself ‘it’s calm, I’ll do it later.’ But these things seep through. The unconscious brain is very powerful, very potent, and the worst thing is that you have no idea that it’s happening. You can be talking and some attitudes might seep through or some personality issues might seep through and you have no idea until maybe one of your friends says, ‘you were just rude to me’ and you didn’t realise – you were thinking everything’s fine. So it’s important to realise what’s going, and ask yourself ‘is everything good?’

In Hall Of Mirrors it feels there’s a battle with nostalgia. Do you consider yourself a nostalgic person and how do you approach it through your work?

Oh man, nostalgia lives in my head rent free. It’s always there. I don’t think it’ll ever leave. It’s so easy to look back on past events or best things and think what a nice time it was, because you naturally filter through events in your life and sort them into good and bad. The good ones ultimately prevail over the bad ones in the past. I would say, presently, that negative emotions might take precedence over positive ones, which is why I think it’s so easy in 2020 to fall into a state of sadness with the general surrounding and all the shit that’s happening. It’s so easy to think, ‘we’re done — what is this life?’ But then comes in, ‘but look at where we were two years ago – wasn’t that fun?’ You look back at things with fondness, even through hard times. I broke my foot at a Kendrick Lamar concert, and I look back at that and laugh. At the time, I was like ‘man, I just broke my foot! For a whole two months I can’t go anywhere.’ But now I look back on it with joy. I guess nostalgia has to creep through with the kind of music that I make. Especially with the theme of the album – looking back at how I was, how am I now, and how I’m going to be – charting that three stage progression.

I want to talk about A Way To Go. Could you speak to the title, the concepts, the thoughts behind it?

The title has a double meaning. It’s like ‘way to go’ – well done. But you’ve still got ‘a way to go’ – keep going. When making the project, I was talking about a personal journey, and an exploration of getting in a rut, and then getting out of it. How I would sit alone in my room at 3am, and figure out how we’re going to get past this point of being stuck, or sad. And part of that was what I attempted to express in the title – looking back at the progress you’ve already made and then looking forward. You might think ‘what have I done, really? What is it really that I’m trying to do? Is it really having an effect? Is it doing anything?’ It’s so easy to put yourself in that place, but I just had to take a look back like two years ago when I dropped my first project An Open Door. All I need to do is look back to when I created that in compassion to where I’m at now, to say, ‘you know what, I think we’re doing alright. Let’s keep going. Way to go. But let’s keep going. We’ve still got a way to go.’