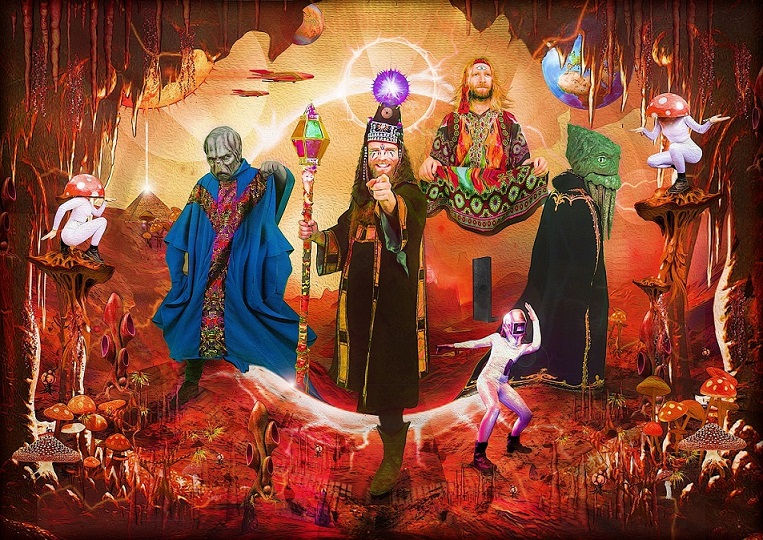 Psychedelic prog-rave band HENGE have developed a cult following thanks to their wild live shows, their message of joy, and their journey from outer-space. Combining tremendous abandon and energy, with unflinching commitment to their story and purpose, HENGE are a band who are actually doing their own thing.

We spoke to the band to find out more about their philosophy, the future of humanity, and the artform of ‘Cosmic Dross.’

Why do I get the feeling this won’t be a normal interview?

Greetings human. Am I to take it that this is the first time you have interviewed a so-called extra-terrestrial…? In which case, allow me to introduce myself. My name is Zpor of the group known as HENGE. I was born on the planet Agricular in Cosmos Redshift 7.

Tell me your story, in a nutshell.

Our story cannot be contained within a nutshell. It spans billions of years; in which time I witnessed such sights as the destruction of my home planet and the evolution of life on Planet Earth. I also witnessed the destruction of your neighbour Venus which used to support many lifeforms yet underwent an apocalyptic climate catastrophe caused by a runaway greenhouse effect. We managed to save one Venusian specimen – Brother Goo – who now travels with us and whose deep understanding of the bass frequencies has greatly enhanced our music.

We came of our own volition after picking up distress signals from Earth sent through the astral realm. A human being – now known to us as ‘Grok’ – made contact with me and my crew. He told us of your plight here, and of the imminent danger that you Earthlings have put yourselves in. I was already following the human species’ development towards a higher intelligence and feel a certain responsibility to help you avoid the sort of fate that befell the Venusians. And so, in haste, we travelled back to this solar system and were guided by Grok to a safe landing on your dangerous, militarised planet. We landed at an ancient site in England from which we took our name – HENGE. Now Grok has joined our crew and operates powerful synthesisers during our sonic transmissions.

What is Cosmic Dross?

Cosmic Dross is an ancient and sacred artform, first developed on my home planet. This music provided the soundtrack to the Agriculan’s Second Age of Enlightenment where my species were able to put aside war and work harmoniously to develop Agriculan colonies elsewhere in space. This ultimately saved my species from extinction as our planet was later engulfed by its dying star. Far from being a mere folk tradition limited to one planet or one species, Cosmic Dross is a living artform that has evolved and mutated over millennia. One such mutation occurred on the planet Xylanthia in the Sirius Star System. While on this planet I was fortunate enough to encounter the creature we affectionately call ‘Nom’. He is a skilled membranophone player. He shared with me a psychedelic plasma after which we fell into a musical trance. During this time Nom’s amphibious rhythms interfaced with my own Agriculan music traditions. When we awoke from the trance, we found that a new genus of Cosmic Dross had emerged.

Why do people love you so much?

As ancient beings that are not of this world, we have much wisdom to impart to the human species. Not least is the idea that playfulness and humour are essential ingredients in your evolution towards a higher intelligence, perhaps even a superintelligence. After all, do not forget that without human’s capacity for playfulness you would never have developed language, art, or music – and thus, you would never have developed the civilisation you have today. However, there are forces in your society that seek to suppress these instincts, dull them down with fear and ultimately replace joy with hate. We are at war with these malevolent forces. Whenever the transmission of Cosmic Dross occurs, a sonic forcefield is generated which shields people from fear and hate and creates the perfect conditions for joy to flourish. This often results in feelings of love in human specimens which can last for a long time after the transmission has ended.

What lies ahead for the human race?

We cannot tell the future. We can only urge humans to put aside war, greed and hate; to halt the rapid destruction of your beautiful planet; and to encourage the proliferation of joy among living beings. On Planet Earth you are vulnerable, not just to your own man-made climate disaster or nuclear war but to asteroids, supervolcanoes, viruses… You must strive to spread out into space and develop habitations beyond the confines of your own planet. There is much work to be done to achieve this aim but humankind has the potential. Just like my home planet, eventually, your planet will be engulfed by the sun as it expands and then dies. Therefore, ultimately your salvation lies in space.