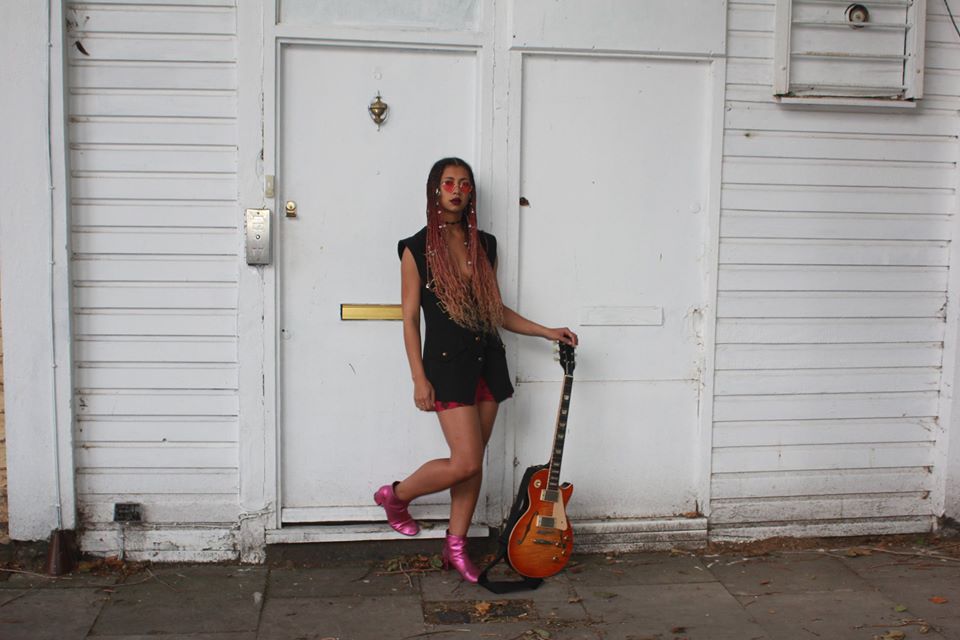 The recent tidal wave of emerging London jazz bands has hailed a new era of fusion and experimentation for jazz music. Over the last couple of years, we’ve seen a new generation of artists mixing and matching musical cultures, imbuing new life and meaning into a genre that was, for many, fading into irrelevance.

From the heart of this revived scene comes Jelly Cleaver, whose debut album The Dream Jazz Manifesto exemplifies the spirit of experimentation and progress that’s so tangible in the scene today. We spoke to her about her new record and her place in the movement.

Who is Jelly Cleaver?

Well, Jelly Cleaver is just my name. I always say “it’s Jelly as in Jelly on a plate” because most people assume I’m called Jenny when they first hear it. It’s a great ice-breaker.

In terms of who I am, I’m still working that bit out. I’d say I’m a guitarist and multi-instrumentalist, producer, singer-songwriter and DJ who’s hussling in the jazz world while secretly wanting to be a rock star. My other roles are jazz mom (reminding young jazz musicians to sleep and take their vitamins) and activist, trying to use my music to tell people about detention centres, charter flights and other shit we need to do something about.

What is the Dream Jazz Manifesto?

The Dream Jazz Manifesto is my last album. It’s kind of a mash-up of genres. I loosely call it jazz by there’s a lot of punk, electronic, spoken word, R&B and classical influences too. As you can guess for an album called ‘manifesto,’ it’s a bit of a concept album.

Tell me more about the themes you explore on the record.

Basically, it comes down to what I sing in the opening track – “one can believe in anything, why not then believe in a dream.” The concepts are a bit philosophical, and it follows a lot of existential feminist or decolonial thought. There are a lot of oppressive structures and hierarchies that we have created as humans which lead to racism, sexism, inequality and lots of other rubbish. When we think about it these structures are all man-made, and when I say “don’t be a slave to your own creation” I mean that we shouldn’t oppress ourselves with our own thoughts. Of course, when you start questioning everything existentially it can lead to nihilistic thoughts, so after tearing everything down in the first few tracks, I try to build it up again. If we can choose our own meanings then we can choose to value love and choose to fight for what we think is right.

That’s why I sing about Yarl’s Wood detention centre. The way this government treats asylum seekers and migrants is disgusting. I’ve heard too many stories of human rights abuses and general inhumanity from people having to deal with the home office. In detention centres like Yarl’s Wood people can effectively be imprisoned for any length of time without having committed a crime and there’s so many stories of abuse, mental health issues and more. If you don’t know about the UK detention and deportation system or hostile environment policy please go look online at sites like Detained Voices or Global Justice Now. It honestly makes my mind spin how mad it is, and we really need to come together to do something about it.

It has been said that you are a bringer of cosmic truths. Tell me more.

Well, the cosmic truths are all already within you. Sometimes you just need some music to vibe out to, to lose yourself in, and you rediscover something essential.

Also, as you might have noticed, searching for cosmic truths is the kind of thing that I like to write music about. Writing music is a way for me to ask those questions of myself.

Tell me about Jelly’s Jams and what’s going on in the London jazz scene.

Jelly’s Jams is a monthly night I put on at Windmill Brixton. It’s actually more of a punk venue – bands like Black Midi, Shame and Goat Girl were kind of bred there. But somehow I seem to have become the honourary jazz promoter. I wanted a chance to put on bands I love who wouldn’t normally be on the same line-up. Last time I put on Xana who did incredible beat making and spoken word improvised on the fly, rapping about everything from mother nature to the little mermaid, and then Invariance who did a mad jazz-rock-minimalist set. Next time, we’ve got disco and then a bebop band. And for the jams, my absolute aim is for it to be as inclusive as possible. I want to get people coming up who have never gotten up at a jam in their lives. It makes for some pretty creative results.

The London jazz scene is really thriving at the moment. There are so many bands and projects which are just in their early stages but they’re absolutely changing the game and I can’t wait for everyone to know about them. The main thing that sticks out for me about the London jazz scene is that everyone’s just mates, every gig’s a hang and we’re all just encouraging each other. It’s super inclusive and friendly, none of that sad smokey jazz club stuff that jazz used to be associated with. It’s really fun!

What’s next for Jelly Cleaver?

Well, actually, I have new music coming soon! I don’t think anyone’s ever done this before but after I’d recorded The Dream Jazz Manifesto I had so many alternative takes and different edits that hadn’t made it to the record, I wanted to still do something with them. So I’ve made a whole mixtape of beats using samples from my last album. It’s way more hip-hop and electronic than the last one. One single’s already out from it actually featuring the fire contributions of Isatta Sheriff and the voicenotes of Lorenz Okello-Osengor. I’m not sure quite if I’m going to be able to do it as a live thing but look out for the next few singles to drop…

Reza Pahlevani: The Story Of His ‘Roozmaregi’ EP