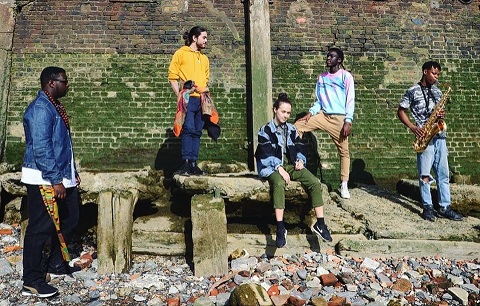 Contemporary jazz hasn’t always been well received by young people. For a long time it’s been dismissed as a pretentious genre preferred by austere middle-aged audiences. But in recent years this stereotype has been turned on its head. In the UK there’s a tight-knit network of young musicians changing the face of contemporary jazz. And at the heart of this network is London, a city which continues to lay fertile ground for the new generation of UK jazz.

The new London jazz scene has grown up through a number of grassroots venues, labels, development programs and online radio stations. A lot of cross-pollination goes on, with players constantly collaborating and forming new projects with one another. Many of the key players – including the likes of Nubya Garcia, Shabaka Hutchings, Moses Boyd – met through Tomorrow’s Warriors, a programme which focuses on the development of young musicians from minority backgrounds. The Total Refreshment Centre has proved to be a crucial venue for the resurgence of UK jazz, acting as an inclusive hub for the burgeoning community. Nights like Steam Down and Jazz re:freshed also aim to nurture the diversity of the scene and challenge elitism within the jazz community.

The energetic, celebratory vibe of these nights makes them more akin to a club night than the stuffy, sit-down affair that many would expect from a live jazz performance. Alex Burke, aka Forest Law, notes “I went to one Steam Down night and that helped me understand how deep the connection is between the musicians and the fans – it felt like I was in church!”

The refreshed London Jazz sound reflects the rich cultural diversity of the city today. Emerging artists are blurring the boundaries of the genre and melding it with styles from across the world. Those who have orbited the scene making ‘not quite jazz’ or ‘jazz influenced music’ are perhaps more involved than ever.

Laurence of emerging outfit Zeñel (trumpet, synth) highlights the ever shifting definition of jazz and the “schism between those who are part of the new London jazz scene and those who aren’t”. He believes some musicians who take a more academic approach to making jazz have a tendency to criticise the new scene for being “vapid” and “pandering to popular taste.” He adds “those who assign sentimental value to a more conservative definition of jazz probably don’t have much chance of changing young people’s minds about what the word ‘jazz’ means…I prefer not to put things in boxes if you don’t need to.”

Musicians with their roots in the African and Carribean diasporas are fusing traditional forms of jazz with afrobeat, calypso and dub, while other groups are embracing latin styles like cumbia and samba. In her album Arise, vocalist Zara McFarlane explores her Jamaican heritage, marrying the rhythms of reggae, kumina and nyabinghi with US hard bop. Kokoroko draw on afrobeat, highlife, and ethio-jazz in their celebratory, horn driven sound. New risers Vula Viel combine Reichian minimalism with jazz improvisation and traditional Dagaare rhythms. Yet despite their myriad, far-reaching influences, each of these groups are united by an essence which is distinctly ‘London.’

Despite their myriad, far-reaching influences, each of these groups are united by an essence which is distinctly ‘London’

The rising London Jazz scene also has much to owe to UK club culture. Artists like Yussef Dayes, Alfa Mist, and Moses Boyd are embracing homegrown styles like grime, garage and broken beat. Labels like Eglo Records, On The Corner, Rhythm Section and 22a bridge the gap between jazz and club music and perhaps provide a gateway to instrumental jazz for younger listeners. The line between the two camps is becoming increasingly blurred thanks to the rising popularity of crossover artists and collaborations between jazz and electronic musicians like Nubya Garcia and Floating Points. Radio DJ Gilles Peterson has also played an important role in the renewal of UK jazz. His label Brownswood has been at the heart of the scene since its inception in 2006 and since then has provided a platform for emerging artists from London and beyond. He also runs a development program called Future Bubblers which has provided mentorship to artists such as Yazmin Lacey and Skinny Pelembe.

New London jazz has developed rapidly since its inception, with thousands of followers across the world now tuning in and watching it unfold. Yet the scene has continued to maintain an ethos of diversity and inclusivity, with older members offering valuable knowledge and support to the next generation of players.

Read on to discover five emerging London jazz bands that deserve your attention.

Invariance are a recently formed outfit featuring Black Midi’s Morgan Simpson on drums. They take an eclectic approach to jazz, drawing on elements of 70s fusion, prog rock and R&B. Their repertoire varies from sprawling improvised jams to more succinct tracks like their debut single ‘Oracle.’ Two of the group’s members, Lorenz and Kaidi, attended the Tomorrow’s Warriors programme and credit it with bringing many of London’s passionate young jazz players together. They are already firmly embedded within the scene and are excited to see “many different flavours” emerging from it.

Forest Law’s bright, polyrhythmic compositions may not fit the traditional definition of jazz but they certainly sit within the realms of its influence. He cites Milton Nascimento and Orchestre Poly-Rhytmo de Cotonou as his main sources of inspiration, and you can certainly hear strands of Brazilian jazz and afrobeat woven into his work. He is currently a member of Gilles Peterson’s Future Bubblers programme under the mentorship of DJ, producer, and curator Esa. Speaking of the London Jazz scene, he notes “I love how it’s reflecting the diversity and ever-evolving identity of the cultural melting pot that is London”. Keep your eyes peeled for forthcoming releases.

Jelly Cleaver is a singer-songwriter, multi-instrumentalist, producer and activist whose myriad influences span 70s soul, disco, rock and the current jazz and DIY/punk scenes in London. Her debut full release The Dream Jazz Manifesto demonstrates her ability to hop elegantly from genre to genre and handle weighty political themes with confidence. Jelly runs a regular night called Jelly’s Jams at the Windmill in Brixton and is part of Tomorrow’s Warriors Female Frontline. She speaks fondly of the scene, mentioning “because we’re all mates and in each other’s bands it’s just like one big family hang out all the time.”

Nihilism are a quintet who embrace the eclecticism of new London jazz, joining the dots between jazz, hip hop, soul, and grime. They take note from Kendrick Lamar, Thundercat, Robert Glasper and John Coltrane – to name a few. The group shake up the standard contemporary jazz lineup, adding violin and electronics into the mix. You can often find members of Nihilism honing their sound with their peers at improv night Steam Down. They feel the London Jazz scene is a “beautiful community” made up of “like-minded individuals that are family.”

Zeñel create unique electro-acoustic compositions which are shaped by the legacy of electronic dance music as much as they are by jazz. Their influences range from Joe Zawinul, to the Prodigy, to J Dilla. Their recently released single ‘Bubbleleaves’ evolves from squelchy futuristic funk into loose jazz improv grounded by interlocking synth lines. Speaking of the London jazz scene they say “we couldn’t really ask for a better time to be doing our thing as young creative jazz musicians in London.”