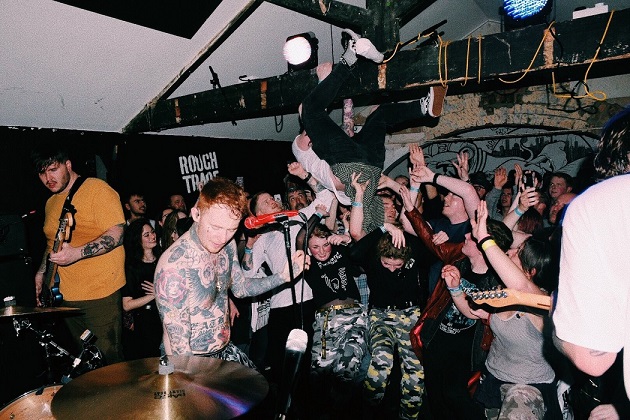 It’s no secret that Nottingham’s music scene is in fine fettle right now, and a big part of that is played by the city’s fistful of knockout venues. Iconic stages which have drawn the great and the good to Notts for decades, DIY spaces giving a platform to explosive emerging acts from around the globe, and pubs that shove their tables and chairs aside to make way for bands on the regular. Here’s our guide to some of the best Nottingham music venues.

Arguably the trendiest Nottingham music venue, the team behind The Bodega have a real knack for booking acts right at the beginning of their golden ascents. Ever wondered what it would have been like to see The xx or Florence and the Machine play a 200-capacity venue before their stadium-smashing days? Notts folk lived it, thanks to The Bodega (and then some – the list of Bodega alumni is seriously star-studded).

It’s recently celebrated its twentieth birthday, and is clearly setting its stall out for decades of future brilliance. Throw into the mix their legendary club nights and glittering beer garden, and you’ve got yourself an absolute belter of a venue.

Celebrating its fifth birthday this year, Nottingham couldn’t believe its luck when it was announced that the only Rough Trade store outside London and New York was to take up residence on Broad Street.

And what a half decade it has been: the independent record store attracts an exhilarating array of emerging and established acts to deliver in-store performances. Far too many acts have been notched up to name, but put it this way, Sleaford Mods are regulars, and Frank Carter and the Rattlesnakes have nearly made the ceiling cave in on several occasions.

Nottingham’s Rough Trade has become a real hub of the community too, with regular events like Drink and Draw socials and Drag Bingo bringing folks in to enjoy the space, even when the PA is switched off.

This hallowed Nottingham music venue needs no introduction. Having just this recently bagged the Best Major Club award at the Live Music Business Awards 2019, Rock City is a music emporium, boasting two stages, an expansive balcony, and numerous bars which make for a delightfully cavernous club set-up and a killer live music experience.

The main stage’s rectangular arrangement breeds one heck of a panoramic view, no matter where you find yourself. Having over the years hosted the likes of Bowie, The Smiths and Oasis to name just three, Rock City ought to be at the top of any music lover’s venue bucket list.

As a relative newbie on the Nottingham music circuit, it hasn’t taken Metronome long to build an impressive reputation. Having been dreamed up by a team of music industry experts on a mission to create a space which pairs eclectic programming with audio-visual prowess, they’ve basically nailed it.

Metronome’s expansive stage has already played host to some of the industry’s most illuminating characters – think Snapped Ankles, Acid Mothers Temple and Don Letts – and its future looks refreshingly bright.

While it’s not quite in the spirit of the DIY scene to call out royalty, Nottingham’s JT Soar is surely in line for the Best UK DIY Venue throne. On the cusp of its tenth birthday, this former fruit and veg shop is an iconic testament to the city’s inclusive and heuristic music scene. Don’t be fooled by its small, fusty interior – the sound quality is so strong that Sleaford Mods decided to record their latest album here.

Nestled in the heart of Sneinton, it gets packed out every week with bands from all over the world – it’s become a real platform for local promoters to bring fascinating line-ups together from their respective niches, as well as a space for the most emerging of local acts to cut their teeth. And who doesn’t love a BYOB venue?

Leading international art gallery by day, cavernous music venue by night; Nottingham Contemporary is an institution with many strings to its bow. The expansive concrete basement space has all the makings of a 1970s underground club, and has recently played host to Mercury Prize nominated black midi, and further back, the Sun Ra Arkestra and Lady Leshurr.

Music comes in many shapes and forms at Contemporary, whether through individual event programming, gigs planned and delivered by the gallery’s youth collective 1525, or through expertly curated line-ups in support of each new exhibition opening. Whilst its music programme is not as busy as it used to be, Contemproary is one of those venues where you never know who might pop up next.

A stalwart of the Nottingham music scene and with good reason, Jamcafé occupies a special place in the centre of Hockley, and in the hearts of its eclectic crowd. Largely known for top-notch DJ sets by owner Bradley, and a host of guest spinners, Jamcafé takes part in all of the city’s music festivals.

The intimate wooden stage even hosts its own bespoke events from time to time, and is home to a weekly open mic night which has over the years gained legendary status. With the music playing and drinks being poured late into the night, the good time guys and gals of Nottingham flock here in droves, making for a seriously liberating vibe. One of the truly legendary Nottingham music venues.

Seen by locals and music lovers as The Bodega’s big sister, the elevated stage of Rescue Rooms has been graced by some of indie’s brightest stars – from Bloc Party to The Strokes. Established back in 2003 on the site of a fading sports bar, the venue had a strong start – it welcomed The Libertines during its first week.

With a 450 capacity and a dizzying stage height, Rescue Rooms occupies that pivotal transitional space for bands working their way up the live music ladder – and often, those on the verge of a big breakthrough. Backing onto Rock City in Nottingham’s heart, this is one of those venues with a downright special spark.

The Lion at Basford

It’s always worth making the short jaunt out of Nottingham city centre to frequent The Lion at Basford. It’s a proper pub through and through, but hosts live music on the regular, and every once in a while puts on a mini-festival packed full of local talent from a diverse mix of genres.

Nottingham promoters I’m Not From London take up residence a few times a year, making The Lion shake and shudder with bass and soul. The beer garden decking becomes a stage when the sun shines, or else everyone crams into a corner of the pub’s circular interior – either way, it’s a party on Nottingham’s outskirts that you’d be more than slightly daft to miss.

Another relatively new addition to the deck of Nottingham music venues is Peggy’s Skylight, a swanky jazz and blues bar on the edge of Hockley. Step through the doors and you will discover a beautifully nostalgic space, reminiscent of a vintage cinema with lashing of années folles charm.

The venue’s mission stems from a real zeal for the ever-evolving world of jazz – and just as the genre has influenced soul, hip hop and R&B, the reciprocal influence these kinds of music have on jazz is reflected strongly in Peggy’s ambitious programming. With a Middle Eastern Mezze menu to boot, this is a delightfully unique way to spend an evening in Notts.

A hidden Nottingham music venue with the huge reputation (Jason Williamson and Andrew Fearn, aka Sleaford Mods, met here), The Chameleon Arts Café is a firm favourite of those in the know on the UK DIY circuit.

Run by charismatic owners, this is truly the peoples’ venue – nowhere more prevalently displayed than when it fell victim to mindless vandalism earlier this year, and the crowdfunding response was so massive that they raised almost double their target and subsequently held a series of free celebratory gigs.

You’ll be hard-pushed to find a busier or more stimulating gig schedule than at The Chameleon – revered nights by regular promoters mingle buoyantly with one-off wonders, spanning more genres than you can shake a stick at. A real jewel in Nottingham’s music crown.

Situated slap bang in the heart of Hockley, The Angel Microbrewery serves as a stellar gig venue and a mean slice of Nottingham history. Having stood on Stoney Street corner since the 1600s, it’s unsurprising that the walls have witnessed some sights – we’re talking murders in the 1700s, as well as housing a brothel, and later a chapel, before taking on its current form as a public house.

It was during the 1980s that The Angel garnered a reputation for raucous live shows – Arctic Monkeys even played here in their early years. Riding on that wave, it continues to attract a broad crowd these days, thanks to the DJs and bands who keep that legacy alive.