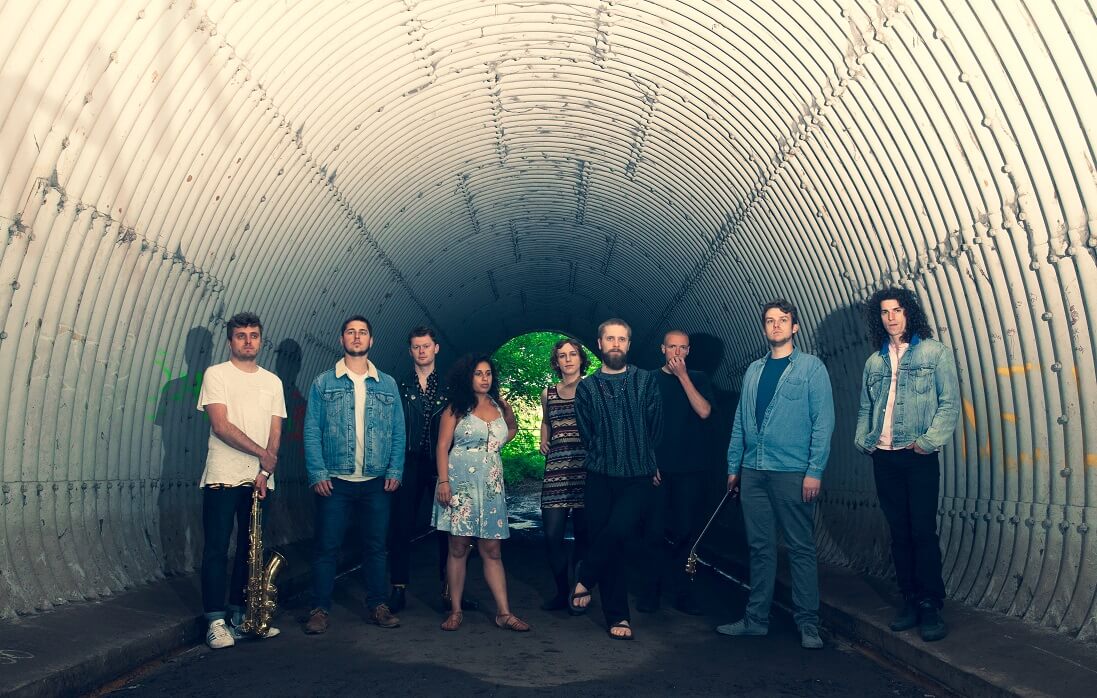 M.O.S, the debut album from Mansion of Snakes, shows the 10-piece Leeds/London-based troupe reach new levels of depth and sonic maturity. Whilst staying loyal to their early afrobeat sound, the debut album draws on a new palette, calling to mind the free jazz of Sun Ra, 1970s Ethiopiques, New York new wave and more, with singer and percussionist Vanessa Rani in centre focus. The result? One of the most accomplished, satisfying, and complete records to emerge from Leeds’ burgeoning scene this year.

We caught up with saxophonist Ben Powling to learn more.

What’s the story of Mansion of Snakes?

Mansion formed in 2014 because a friend of ours was running a new night and was short a band. Greg and I got some friends together to play a bunch afrobeat deep cuts and a couple of jams. This lead to some house party gigs and we stayed writing originals.

The band started as an instrumental group but Vanessa saw us play a house party show and asked to join. We were already fans of her old band Manjula. She’s a great percussionist but also started bringing these amazing songs along to rehearsals.

In 2017 we released an eponymous EP, followed by a season of festival shows including Green Man, Shambala, Kendal Calling, Smugglers Festival, Beatherder and Edinburgh Fringe.

In 2018 we released Mating Season on 7” vinyl through Leeds indie label Come Play With Me.

Tell me about the new record.

We wrote and recorded new album M.O.S through early 2018 at Sundown Studios in Leeds.

The focus of the album has moved more towards song structures and away from extended instrumentals. Vanessa’s voice and lyrics have definitely become the centrepiece of this record.

This album feels like a more mature, cohesive statement than our earlier releases. There was a conscious effort to make this feel like a real album, and not a collection of songs. Our trumpeter Jack produced the album and had a real vision for this.

You’re based between Leeds and London. Tell me about these cities, and what it’s like to go between them.

A lot of Vanessa’s lyrics are rooted in the gentrification and social injustice she sees in London but this is a universal story. It could equally be about Leeds or any number of Northern cities.

Leeds has been a good home to us. We all met here and the majority of the band still live here. The low cost of living means that artists of any genre have more time to hone their craft and the fact that every house in the LS6 postcode has a basement makes for easy rehearsal space.

I’d love to know more about your psychedelic and afrobeat influences. What do these genres mean to you?

The music on the new album has moved away from our early influence of 70s afrobeat. This was both a conscious decision and a natural progression. When writing M.O.S. we drew heavily from New York 1970s new wave, such as Talking Heads and ESG, free jazz, the classic Ethiopiques compilations, James Brown…

With ten members you naturally have a deep bench of influences. When Greg and I lived together we spent a lot of time listening to dub, Parliament Funkadelic, bits of punk. Charlie’s really into Death Grips, Maplin loves Paul Motion, Sam’s into Squarepusher. Some of these influences manifest in the music, others don’t, but it all helps to give a richness to the sound and musicianship of the band.

And finally… what’s with the terrifying band name?

Our bass player Sam plucked that out of a Jack Kerouac novel when we were desperate for a name. I’m not sure which book. I’m not even a fan of Kerouac…