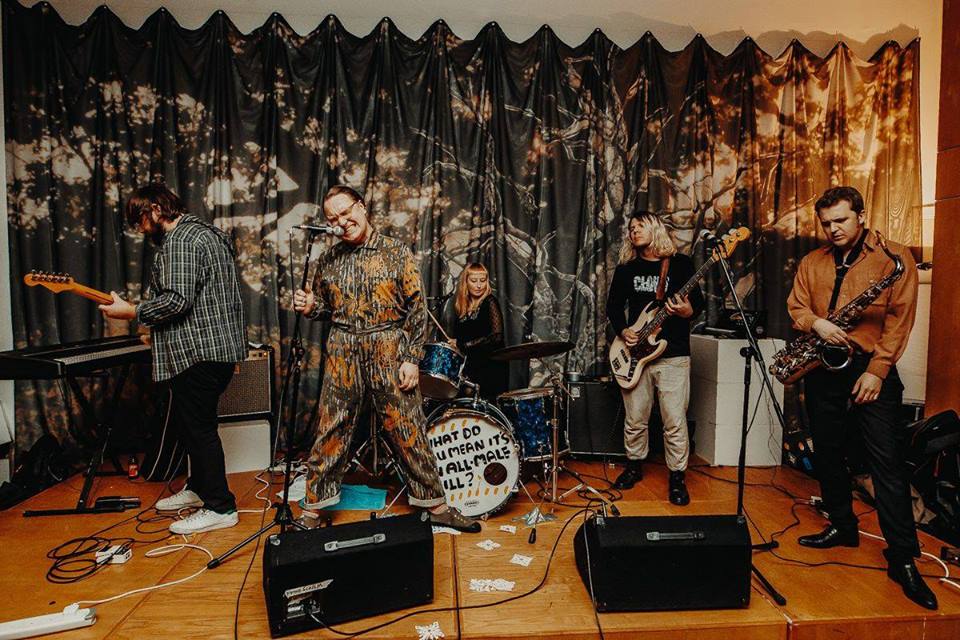 Emerging musicians and bands from Nottingham: a Pink Wafer guide

With a spirit of rebellion dating back centuries, it’s fitting that Nottingham’s music scene is aglow with musical upstarts today. From game-changing indie and radical psych, to searing folk singer-songwriters and exuberant collectives, it’s an expansive scene, ripe with collaboration and talent. Here are twenty acts which you need to get in your ears in 2019.

Frenzied, fiery, and fearless sounds spew from local powerhouse four-piece Babe Punch, a band with a track record for boundless live energy and enviable sartorial style. Brick walls of punk and grunge are punctuated by Molly Godber’s piercing vocals, with humming amps, athletic basslines, and cutting riffs making for one hell of a sonic ride.

Their explosive attitude has pushed them right to the top of the UK DIY scene, where they’re always the life and soul of the party.

A recently formed project with palpable potential, Benjamin Zięć and The Rarebreeds is helmed by local maestro Trekkah Benjamin.

Gritty and raw vocals demonstrating a journey back to his roots are joined by a coalescence of blues, folk, and grunge from The Rarebreeds, a self-described “rallying of the troops” which has seen some of Nottingham’s most respected musicians unite. Expect absorbing lyrical storytelling and heaps of melody.

Check them out here.

Alternative folk is having a moment in Notts right now, and while the spirit of collaboration seems similarly contagious, Black Mustard make their mellifluous entrance. The joining of forces of Jimi Mack and Alice Robbins – each highly talented and novel folk musicians in their own right – Black Mustard is a project in its infancy.

But if the delicate yet turbulent tones of their early live shows is indicative of their direction, we’re on the edge of our seats awaiting their upcoming string of local performances.

Watch a clip from their Sofar Sounds Nottingham set earlier this year.

Songstress Camille Christel teams up with a changing roster of musicians to make wistful noir-ballads that slow things right down, while simultaneously humming with life. A performer from a young age, she has lately enchanted the likes of BBC tastemakers Mary Anne Hobbs and Dean Jackson with velveteen vocals that float across stirring musical soundscapes with salience and heady volatility.

Her most recent release ‘Chicago’ – an ode to the city, joining earlier tracks ‘Copenhagen’ and ‘New York’ – cements her reign over a delightfully melancholic dream world.

We highly recommend getting lost in it here.

Ambitious art-rock quartet Do Nothing aren’t simply riding this year’s post-punk wave. Content with nothing less than constant experimentation, they are speedily becoming revered for the way they dismantle and rebuild their tunes, and for frontman Chris Bailey’s sardonic on-stage persona that has all the makings of Mark E. Smith at the Edinburgh Fringe.

Catch them before they go interstellar, and listen out for latest release ‘Gangs’ – it was written to be a killer live song and it totally triumphs.

Get a flavour here.

A Nottingham institution who have been delighting audiences for over twenty years, Fat Digester bring the funk in a way that few other collectives could even imagine.

With a roster of musicians that changes with the wind, their reputation as party starters emanates from three hugely charismatic front people, carried through their tireless guitar and bass players, and propped up by plenty of percussion and buckets of brass.

The energy is like an epidemic during their infamous live shows, where funk, hip-hop, and soul collide in the jazziest of fashions.

Have a boogie over here.

Ironically named local sensation The Invisible Orchestra defy description on a whole new level. As a 16-piece core ensemble with a penchant for huge live performances – frequently multiplying to over thirty – they fuse big band, jazz, funk, Latin, and Afro beats with punk, dance and hip-hop to form a thrilling and powerful output.

It’s no surprise that this formidable collective have earned collaborations with some huge acts, including local legend Harleighblu and UK rap star Scorzayzee.

Big bluesy tunes and boundless musical mastery characterise singer-songwriter Jinda Biant. His songs are packed with heaps of stomp and soul, and are delivered with spirit and a sparkle in his eye when brought to the stage.

An uplifting energy drenches his output, with expansive influences potently at play, and he’s certainly not a stranger to collaboration – he teams up with Mollie Ralph and Clarke Camilleri on the regular. He released swaggering debut album Restless to a fevered crowd at The Bodega earlier in the year, and we’ve had our eye on him ever since.

Have a listen for yourself.

Their disruptive take on songwriting and a shared exploratory spirit which ignited in their early teens makes the kudos unsurprising. Their sound evolves with each release, presiding over playful metamorphoses with serious conviction. A crooked, fresh and delightfully noisy prospect.

Get them in your ears right here.

It’s unlikely you’ll have heard a voice as haunting or as idiosyncratic as that of Leah Sanderson, who creates intoxicating noir-folk under the name Keto. Traversing sometimes bleak and always celestial landscapes, her voice is a stirring beacon at the centre.

She has shone at an impressive array of festivals over the past few years, including Glastonbury and Green Man Festival. Following the release of debut album Blackened Pool in 2018, which was recorded in the Outer Hebrides, Keto continues to tread a spellbinding path with her lush and melancholic sound.

Exploratory project Megatrain is the brainchild of singer-songwriters Felix M-B and Tiger, who together craft nostalgic folk with a curious edge that has seriously captivated audiences over the past year.

Through lashings of synth, guitar work, and keys, and bewitching vocal harmonies, Megatrain tell the tales of misunderstood characters with a performative streak which draws from their respective acting roots.

They’re gaining real momentum, and have scored some big local festival appearances and support slots across the city recently – thoroughly deserved from this unique and charming duo.

Things don’t get much more glamourous than singer-songwriter and icon-in-the-making Mollie Ralph. Her powerful and impassioned voice harks back to Janis Joplin, with a depth that at times recalls Amy Winehouse.

Recent tracks ‘Give It Up’ and ‘Over & Over’ signal Mollie’s lyrical softness of touch, with ‘Nightwalker’ showing off a real clarity and determination. Few have the ability to bathe a room in warmth the way she does, with the fever around her full-band performances resultantly rocketing.

Her flawless blend of jazz, pop, and soul sensibilities are sure to stand her in excellent stead on her inevitable golden ascent.

Less of a band and more a fiery rhythmic experiment, Katharine Eira Brown and Theresa Wrigley use drums and occasional vocals to conjure up a sonic hurricane which truly needs to be seen to be believed.

Having formed almost by accident, Rattle released their first EP in 2014, and have since been yielding critical acclaim for their idiosyncratic channelling of post-punk spirit into pushing the boundaries and perceptions of percussion.

Hot off a stint supporting Mercury-nominated indie dismantlers black midi, and shortly to embark on a tour in support of Thurston Moore, this duo are an otherworldly force to be reckoned with.

Ravenously creative multi-instrumentalist Emric John-Sawyer, aka Re Teu, makes cold yet tender music which slips through genres like a powerful mountain stream.

His distinctive and mature sound is a tantalising live prospect when joined by a full band – nowhere as startlingly as during his gripping Splendour Festival set earlier this summer.

Bolstered by a considered and ethereal visual output, Re Teu sounds at once opulent and minimal; glacial and fervent. A totally mesmerising act.

Despite developing a big following, they have never departed from their DIY beginnings – and that’s just one of reasons why they’re so captivating.

About as left-field as you can get, their sleazy electro tunes are accompanied by an absolute cacophony of effects, and their live shows often feature local guest rappers, notably the brilliant Motormouf.

Uttering the name Rob Green in Nottingham tends to yield pure joy, and if you’ve had the good fortune to have witnessed one of his live shows, you’ll know exactly why.

Welding soulful acoustic pop with rap and spoken word, Rob Green’s music ripples with humour and candidness as he explores love, life, and everything in between.

A stalwart on the Nottingham scene, he’s recently got some huge support slots under his belt, and a debut album just might be on the cards over the coming months.

Get yourself ready here.

Loud, monstrous, and loads of fun, local five-piece Slumb Party are seasoned regulars on the Notts DIY scene, taking cues from post-punk and new wave by screwing them up and chucking them against the wall.

Depraved saxophone playing curdles with driving, rhythmic bass lines and shredding electric guitar riffs, and the result is an uneasy yet groovy racket. As a group of experienced musicians, Slumb Party is very much a voyage in disordered innovation; fearsome and funky in equal measures.

Indie doesn’t get much dreamier than the output of quintet Soft Girls & Boys Club. Through an excess of wavy hair, wires, and guitar pedals, they make infectious psych-tinged pop songs with occasional dark undertones.

As self-proclaimed creators of “happy music for sad people”, Soft Girls & Boys Club are definitely on to something – take their EP launch gig at Nottingham’s Bodega earlier this year, which saw one of the biggest stage invasions in the venue’s history – such is the local love for the Softies. Definite ones to watch, this bunch.

Check them out here.

Local Nottingham musician Sam Shaw is serious about psychedelia, and his music project Sundaze is testament to that determination.

With a line-up of musicians which fluctuates like his effervescent songwriting, and a self-taught set of skills spanning multiple instruments, Shaw’s Sundaze is kaleidoscopic, but with a distinctive human streak. Pairing the imaginative edge of The Smoking Trees with the DIY sensibility of 60s skiffle, he creates something that’s surreal yet very listenable.

Debut album Introspection is buoyant and self-assured, making the altogether swampier live iteration of Sundaze all the more welcome and unpredictable.

Rap duo Ty Healy and Nay Loco, who join forces to become Local Healers, deliver bass-laden odes to the city and its people, and have a serious knack for commanding audience participation.

With vocals which straddle rap and poetry, and which are regularly joined by dreamy beats and melodies, there is a standout flow and cohesion at play when this duo perform, which is far from derailed by the laid-back persistence.

They’re ramping up their local appearances, including an imminent show at Nottingham’s legendary festival Hockley Hustle in October.