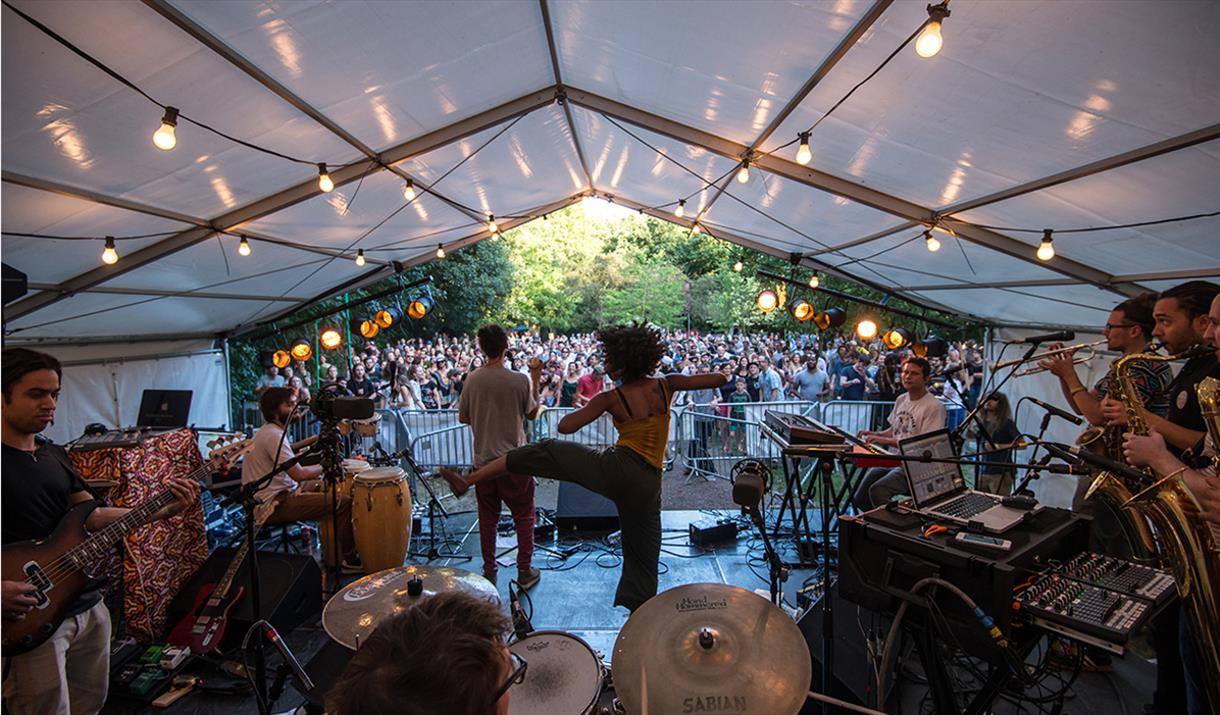 Sheffield is home to a diverse range of genre-leading and boundary-pushing music festivals. Scratch the surface you’ll find a swathe of music events that offer something truly special. From folk, to punk, to experimental, there’s a lot more going on than just Tramlines. Here’s our alternative guide, presenting seven of our favourite Sheffield music festivals.

No Bounds is an experimental and electronic music festival that centres around the renowned Hope Works, stretching out into underground venues around the city. Each year the festival brings in national and international boundary-pushers from the electronic music scene, including the likes of Daniel Avery, Paula Temple, Volvox, and Batu. The 2019 bill so far promises The Black Madonna, Juan Atkins, Mark Fell, and more. Electronic music lovers flock from all over for this one – because it’s really something special.

If you’re into No Bounds, then Algomech might just be up your street. Sheffield is home to a number of pioneers of the algorave scene, including the likes of Alex McLean and Heavy Lifting. The Algomech festival sees algoravers from across the country come together for live-coding and crazy sounds of the highest order. An absolute must for anyone interested in experimental music.

While ostensibly a folk festival, The Folk Forest actually brings together artists from a range of genres, with just as much emphasis on jazz and world as there is on folk. Headline acts have included artists as diverse as Roy Ayers, Lau, Soweto Kinch, and Anchorsong. Located in Endcliffe Park at the suburban boundary of the Peak District, it’s a little haven of musical paradise and one of the most quintessential Sheffield music festivals.

A festival of music, film, and digital art, Sensoria is another Sheffield event that’s all about experimentation and innovation. Spread across the city in multiple venues, the programme comprises a number of distinct events – go to one or two, or get a festival pass and go to as many as you like. The festival merges with Synthfest in the Octagon Centre – the UK’s largest synth exhibitions where you can try and buy synths from pretty much every brand out there. Headline acts in the past have included the likes of BEAK>, Jlin, and Ex-Easter Island Head.

Organised to coincide with Refugee Week each year, Migration Matters festival is a multi-arts celebration of migration and international cultures. Based in Theatre Deli and spreading out into venues across the city, this festival is full of gems. Previous music acts have included Lowkey, Benjamin Zephaniah, Nìdia, Linton Kwesi Johnson, Otis Mensah, and regional acts including the stunning Shahe Mardan Sufi singers and Avital Raz.

The Tramlines Fringe is a city-wide festival in its own right, and it sees venues across the city opening their doors to put on live music from artists all over the region. Almost all the fringe events are free, and for the main part, the variety and diversity you will experience at the fringe may even exceed what you’ll find at the commercially-oriented festival in Hillsborough Park. Check out venues like Bungalows and Bears, Hatch, Delicious Clam, The Washington, and Record Junkee, as well as the official fringe open-air stage on Devonshire Green. If you don’t fancy Tramlines, then the Fringe offers a great alternative to the better-known Sheffield music festival.

Peace in the Park

This guide wouldn’t be complete without mentioning Peace in the Park, a music festival which usually takes place each June. Run by hippies and for hippies, the crowdfunded, free festival based in the Ponderosa park attracts thousands, and it’s all-in-all an impressive feat. Musically it’s no Ronnie Scott’s, but it’s a great place to find out what’s new on the local Sheffield music scene and pick up a big old slice of genuine counterculture. It’s a joy every time.