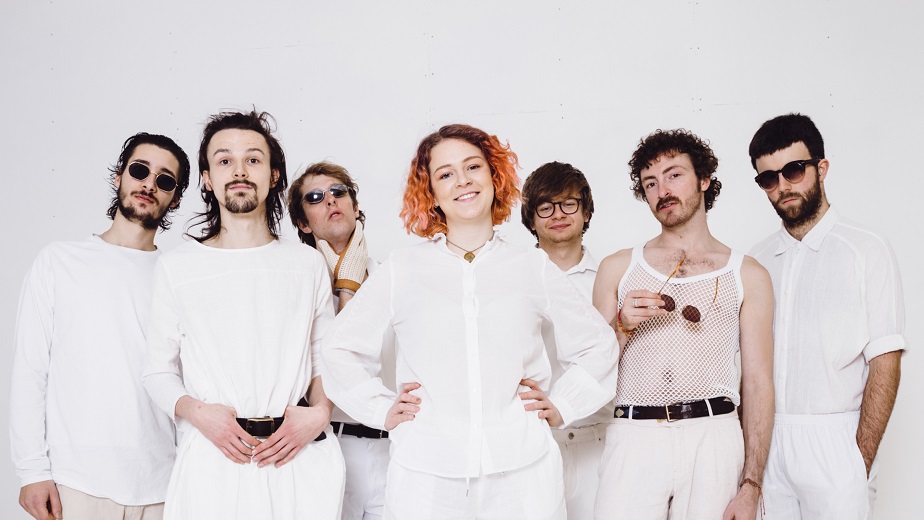 Hailing from Manchester, Bethlehem Casuals are a high-energy mix of folk, disco, jazz, and more, wrapped up in a world of colour. Undeniably, they’re party-starters, on a mission to make you dance. But their latest album also displays a level of finesse that goes beyond what’s expected and required of such a riotously fun band.

With talent, bags of energy, and a sense of humour to go with it, Bethlehem Casuals have everything we love. We spoke to them to about their story, their place in the Manchester scene, and why they’re convinced that Jesus would listen to their music.

Listen to Bethlehem Casuals on Bandcamp.

What’s the story of Bethlehem Casuals?

Many moons ago, Will H (lead vocals), Awen (cello/vocals) and Joe (guitar) decided that Manchester’s folk scene needed its next big trio. However, along the way they accidentally bumped into Buzz (bass) and Will G (drums) whose love of disco slipped the band into a groovy Mancunian underworld it’s never escaped from.

Shortly after, Pip (saxophone) and Nas (percussion) joined and everyone decided we wouldn’t fit any more people in the small spare room at Will’s house we practice in. “That will have to do,” said the Bethlehem Casuals.

Since then, we’ve brought groovy tropical folk to poly tunnels, lake shores, museums, festivals including Latitude and Mandrea, weddings, Marc Riley’s BBC Radio 6 show, and we don’t plan on stopping here. A year ago we released our first album Feels On Wheels which we still like to put on once in a while, and there’s another one in the oven that we can’t wait to share.

Our music is a mish-mash of all our tastes. From Nas’ world percussion knowledge to Awen’s Welsh folk songs, we try to weave a little bit everything into the music we love playing. One day we’ll work out what genre it is. For now, it’s just nice that others want to dance along too.

Tell us a bit more about the Manchester music scene. What’s your experience of the city and where do you fit in?

We’re not too conscious of where we fit into the scene. I guess the great thing about Manchester is that anything goes. Manchester’s music scene has always been tied up in its dirty industrial past – it’s full of grit. We just are who we are, and that’s quite Manchester.

We’re somewhere in the middle of the Piccadilly Rats and the Halle – we love a good rodent but also have a cello section. What makes Manchester great for us is that there are so many different types of music going on to get involved with. From the folk, jazz, or klezmer jams in the city’s pubs, to the established indie scene, there’s always something new to listen to and be influenced by. Most recently we’ve started running our own nights called Keep It Casual to show off all the great music we’ve found.

What other artists in Manchester are you digging right now?

I’ve seen you described as ‘music Jesus would listen to’. Could you kindly shed some light on the spiritual dimensions of your music?

Anyone who has stood in a pulpit knows that Jesus loves groove. He was a groovy man with groovy shoes and he knew how to attract a crowd. There’s also the added bonus that our guitarist Joe is identical to Jesus in looks and temperament. He even has Jesus’s thick York accent – there’s nothing more spiritual than that.

What lies ahead for Bethlehem Casuals?

Plenty more colourful clothing. Plenty more dancing. Plenty more grooves. We’re just about to hit the studio to finish recording our next album – a concept album about a street dog’s uncomfortable journey through the Manchester underworld. This summer you can see us at Glastonbury, Kendal Calling, Lichfield Fuse Fest, Moovin’ Festival, and El Dorado. If you can’t make any of them then we’re going to do a tour in September so we’ll see you then.

Otis Mensah On The Power Of Vulnerability In Music