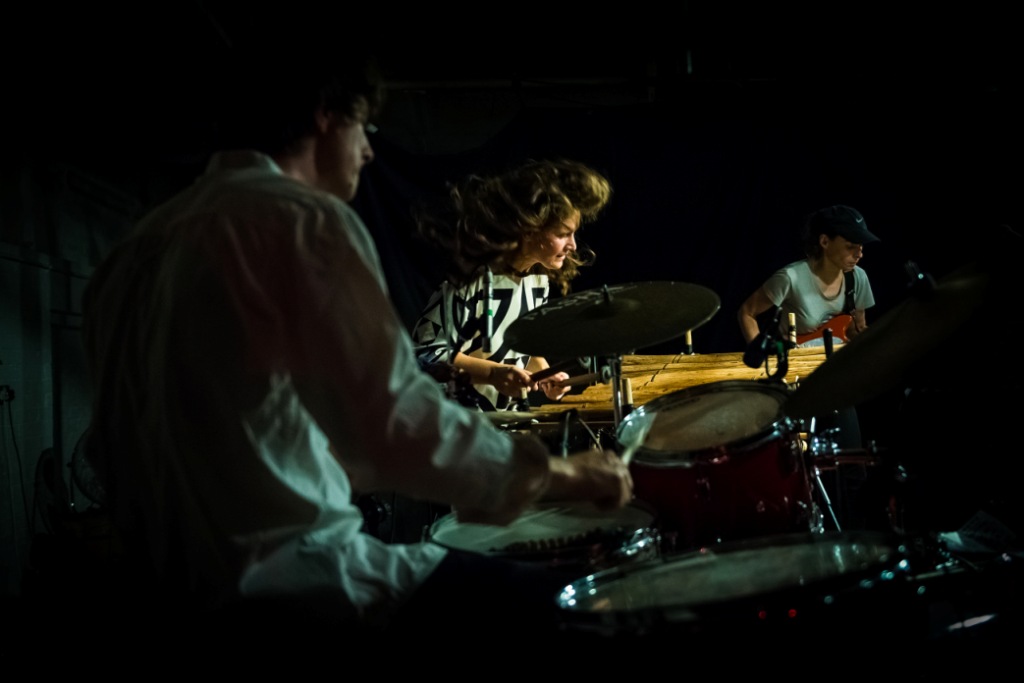 Bex Burch travelled to Ghana to learn about the music of the Dagaaba people from master xylophone maker, Thomas Sekgura. She returned with an unquenchable passion for Dagaare music, and a new name, given to her by the elders of the community. That name was Vula Viel.

Upon her return from Ghana to the UK, Bex Burch went on to compose with Dagaare forms, writing on the gyil – a traditional wooden xylophone central to the Dagaare music tradition. Forming a trio with bassist Ruth Goller and drummer Jim Hart, Vula Viel soon found critical acclaim in jazz and world music circles in the UK and internationally.

If you see them live, you’ll know why. Vula Viel blend hypnotic polyrhythms – unimaginable to most Western ears – with minimalism, jazz, and post-punk influences. The result is something truly striking and undeniably different.

Creatively, Vula Viel’s music is something that no one interested in new music will easily dismiss. Yet at the same time, Burch’s journey and use of the Dagaare tradition raises important questions about cultural appropriation, white privilege, and what it means for a white, British woman to use an African form of music in this way. We caught up with her to get beneath the surface of what this remarkable band are up to.

How do people respond to you playing a traditional African instrument? Obviously you spent a lot of time in Ghana understanding the significance of the gyil in context. But do people sometimes think that you’re stealing something?

This is an important and fertile question and conversation. What composer makes up music from nowhere? I’m not doing very much musically. I’m asking myself one question: what is it about music that moves me?

I believe that music is bigger than all of us and has certainly existed longer than me. Music is one of those things that just exists, like life or death.

The fact is that due to my experiences, Dagaare xylophone music from Guo holds one of the single most powerful musical feelings I’ve ever had. So part of answering ‘the question’ is chasing that feeling. I don’t need to pretend that I invented this music or instrument. The music I make is the process and journey of answering. These forms are enabling me to start writing, to be creative. The creativity is me. It’s part of who I am.

The influence of African music on all that we know as Western music is complete. This is no accident. The fundamentals of African music are incredibly powerful. It works. Classical-based principles of start, middle, end, order and control, hierarchy and dominance both rhythmically and harmonically, is found in our society’s foundations – religion, classical science of Newton’s laws, atoms, man’s understanding and control of the building blocks of the universe.

But when modern science split the atom, what they found was chaos, movement, space, asymmetry – the fundamentals of African music. The mastery of silence, asymmetry as the skeleton of groove, repetition and movement coming from that asymmetry, and chaos written in to the core of the music – African music is based on the same fundamentals that make up every single atom, the whole universe. Leading edge quantum physics is just getting into this. Africa has had it for centuries.

As for whether it’s stealing something, I don’t know and it’s not my business what other people think about me playing the gyil. I earned the respect of my teacher and friends playing in Guo over time. I’m not interested in exoticising my time in Ghana or pretending that I am now a Dagaare myself. I lived there and expanded there such that I will never be the same. This is how we all experience life. Moving to London from Leeds had the same effect. This is how all music is created. Music cannot be unaffected by difference. Difference has dignity, and difference changes us.

African music is based on the same fundamentals that make up every single atom, the whole universe. Leading edge quantum physics is just getting into this. Africa has had it for centuries.

Guo was – and remains – an important place, time and music to me. So much so that I, a white Yorkshire woman, am drawn to play the gyil and to create with Dagaare fundamentals.

There are levels of appropriating another music. The first is ‘wow that sounds amazing,’ and getting a gyil in your band. The second is playing the music on western instruments. The third is fully understanding how music works and moves me, allowing all that music to come through and honour it in every way possible – including but not limited to Dagaare music, which acts as a bench mark for a very powerful feeling. I’m currently somewhere between levels two and three.

My mum and my Dad, and their parents, and my ancestors at some point left behind their land, stories, musics. That space and that absence is perhaps part of why the Dagaare tradition knocked me for six – it was my first experience of an intact, thorough music tradition. Every single person in Guo grows up owning, eating this music. It’s theirs. It’s powerful.

Do you feel that your ancestors haven’t given you the music tradition you would have liked?

No – I wouldn’t change a thing. The choices my ancestors made – an inescapable fact for all of us – mean that I’m alive today. And I’m truly grateful for my life.

I don’t have any yearning to be born into a Dagaare family. That would be disrespectful of my ancestors and all they have given me, but also massively offensive to the Dagaare people, whose own existence is so much more than my three years as an outsider.

I make music on the Dagaare gyil, which I am massively inspired by. And Do Not Be Afraid is almost entirely written on Dagaare forms. The next set of material I am writing is another small step. Right now, that’s all I can do. And it’s a lot for me. It’s all my creativity. On the macro, yes, I belong to a generation of women where I can make music and follow my dreams in a career. I am white British, and I could come and go in a Ghanaian village where my friends could not. I have access to money and security they do not. This is what is. And I stand by it.

The Dagaare tradition was my first experience of an intact, thorough music tradition. Every single person in Guo grows up owning, eating this music. It’s theirs. It’s powerful.

This is not a lightweight but rather is a heavy thing, to bear the good in my life. As you’re asking me about my ancestors, I would say that I am more affected by being privileged in my own family than any other relationship. My family is just closer and affects me more strongly than anything else.

Can you say more about what you mean by ‘bearing the good,’ and what’s hard about that?

Doing anything – healing, expanding, creating, becoming all I can be – carries with it a weight. . And although unpleasant, this guilt gives me weight. So in choosing the I want to live, I’m making a choice that requires strength.

It’s about movement, and flow of life. I intend to accept my good fortune even in the face of suffering around me, maybe some of which I’ve contributed to. In doing this consciously, I also honour all those who have sacrificed so that I have these opportunities, and feed my compassion for the oppressed, and energy to call out the oppressor – both within and externally.

This is of course one side of a balance in also accepting difficulties in my life and not getting stuck in victimhood or self-pity – which is perhaps another conversation.

It’s interesting – you’re talking about ‘the good’ being complicated. But Vula Viel means ‘good is good.’ Doesn’t that mean that if something’s good, then it’s just good?

Vula Viel is such an important name, and lesson. It’s so simple.

When Thomas’ elders gave me the name they said, ‘the good you do remains when you die.’ Vula means ‘good,’ and Viel is actually more like ‘beautiful’.

So I understand your question, but I’m not saying that good is complicated. Good is Good. Good is also a choice and that choice is simple, but not easy.