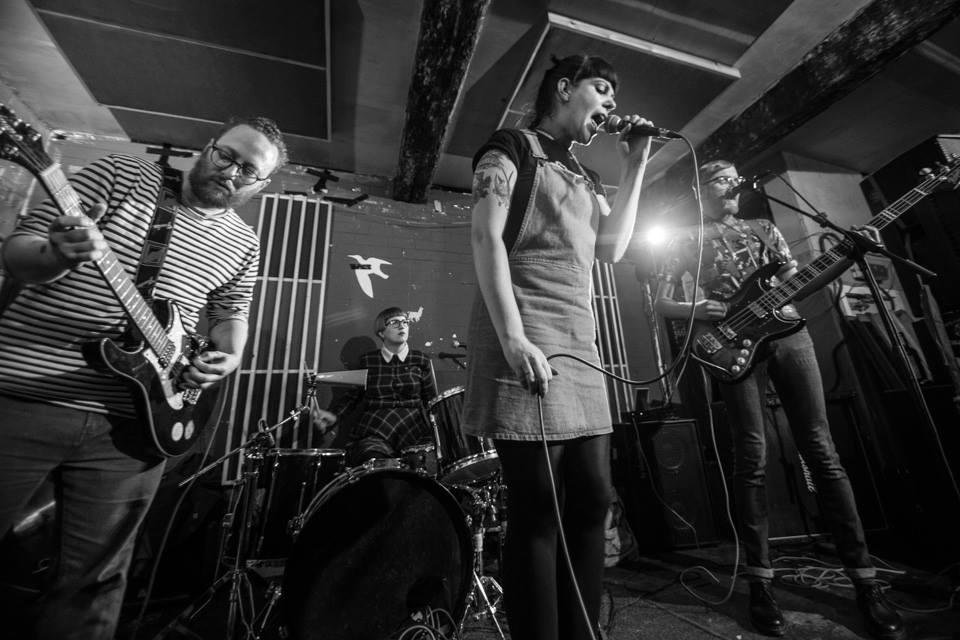 EMERGING MUSICIANS AND BANDS FROM LEEDS: A PINK WAFER GUIDE

Leeds is a city with buzzing music culture. Big things are happening for a whole bunch of these talented Leeds artists right now, and there’s a whole lot more to come this year on both a local and national level. So let’s get stuck in. Here’s our summary of 20 acts that we’re excited about for 2019.

Party-starting veterans Galaxians really upped their game when Emma Mason joined as lead vocalist in 2016, and the band have gone from strength to strength since. Their sound is simple yet effective – pure analogue synth groove, the tightest drums in West Yorkshire.

They’re currently working on a new album to follow 2017’s Let The Rhythm In on the Brooklyn label Dither Down, and will be supporting the legendary ESG on the latter’s final UK shows this year.

Menace Beach are led by Liza Violet and Ryan Needham, but like their music they expand outwards with a host of band members and guests to make a multi-layered rainbow (ahem) of sound (ahem). Their latest album Black Rainbow Sound expanded their hook driven guitar pop out into a synthesised stratosphere, inspired and driven in part by Liza’s interest and work in electronic music.

It’s carried through with a lo-fi, analogue warmth that that pervades every layer of the record. It’s these layers that really make Menace Beach stand out – everything from the guitars to the synths and drums have a grunge-like drone and sustain that makes it sound like nothing else.

A trio based at Leeds’ vibrant DIY venue and practice space CHUNK, Beige Palace embody a fantastic niche. Their music is direct, minimal post-hardcore with touches of No Wave and Post-Punk, but the song content is much less serious.

They’ve recently shared the brilliant ‘Ketchup Dirt’ from their forthcoming LP Leg, out April 2019 on Buzzhowl Records. It’s a stalking, track with deep sub-bass keyboard drone and a chorus about – you guessed it – dried ketchup on a shirt. They’re regulars on the DIY gig circuit in Leeds and beyond, and come with recommendations from Stewart Lee, Kerrang, and now Pink Wafer.

It is a common trope to declare new bands have finally breached or pushed through the envelope of being the loudest, most intense or exhilarating act around. Usually they’re fairly tepid, and up against Guttersnipe, they definitely are. Tipula Confusa and Uroceras Gigas’ music is a unrelenting spew of the most incredible multi-coloured E-number soaked noise majesty you’ll ever hear.

Live, it’s a guitar, synth and drums driven barrage for the senses and not for the faint-hearted. Their debut album My Mother The Vent came out on London’s prime DIY label Upset the Rhythm in 2018 and it’s a blast. For fans of Lightning Bolt, The Locust and having your corporeal body rearranged.

Michelle Ulor is a writer, academic and DJ based in Leeds. She’s a regular at Mutualism parties and the now much-missed Come Thru nights (now reincarnated as Season for 2019, so watch that space), and has a fantastic monthly show on NTS Manchester.

She’s an expert at flowing, seamless mixes of modern club, footwork and pop, and listening to her recent mix for Leftovers it’s easy to see why she’s in high demand. Catch her playing out across the north, or have a read of some of her work on Truants & Insert.

It’ll become quite clear that the neo-soul, jazz and afro-beat scene in Leeds is absolutely booming, and Têtes de Pois the first act from this exciting pocket in the city up for our scrutiny. Their music is an ultra smooth, highly accomplished and a soulful take on modern jazz and afro-beat.

This February they released their latest offering, Framework, and the highlight, ‘Sparks Fly’ features Alice Kim’s fantastic vocal over the septet. The EP’s production is stunning and the band’s performances are absolutely there to match.

The solo project of Hilary Knott of Cowtown fame, Basic Switches is exactly how electronic music should be. Live, organic and a glistening sea of weird and wonderful sounds.

It’s music driven directly by the tools that make it. I would advise that anyone with a fear of tangled cables stays clear – the Basic Switches set up is a plethora of, in her own words, ‘cheap 80s synths, unpopular, obsolete drum machines, human vox and kids toys, home made, broken, circuit bent and/or found in bins’.

Side one of her first EP (out last year on Sheffield label Sunk Records) is a beautifully melodic forest of sounds. It’s totally evocative and completely brilliant.

Get lost in the forest here.

TC and the Groove Family

TC and the Groove Family put an interesting spin on the afro-beat explosion currently coming out of the city, and it’s one of our favourites. Seemingly led and driven by the incredible drumming of Tim Cook, their sound is more psychedelic and groovy than others, with ‘Temple’ throwing you straight into the most incredible live drum & bass seemingly out of nowhere.

They’re also keen collaborators, regularly joining forces with Sheffield hip-hop emcee Franz Von. There’s not much out from the Family yet – just a few mind-blowing live videos. So watch this space!

Climb the steps of their temple here.

Leeds has always been a hotbed of collaboration, with musicians dipping their toes across a myriad of projects. While Lausse himself remains mysterious, scant photos hint at some cross pollination with other bands on this list.

His EP The Girl, The Cat and The Tree is a dexterous and accomplished alternative hip-hop journey. It flips back and forth between different languages, and mixing his relaxed flow with narration that sounds like it’s straight out of a slightly warped children’s book.

Teresa’s been releasing stunning records for a few years now, and last year saw the release of What the Night Is For – a record developed and built around recollections of a bad dream of her boyfriend murdering her and hiding her under a hotel bed.

It’s an unnerving trip, but one that still draws on her incredible vocal talents and pitch-perfect understanding of making slow, pulsating ambient music truly engaging.

Sonically, it’s a simple palette, with ringing, airy organ and synth rolling around looped organic noises – but what it evokes is deeply complex and affecting. Highly recommended.

Watch an amazing live set of hers here.

If you’ve read our run-down of all that’s exciting in Manchester, you’ll have spotted several artists on the incredible experimental electronic music label Mutualism. BFTT is their resident-Leeds-resident, a producer of taut bass-heavy club music wrought with melancholy.

He’s also an incredible DJ who flips this all on its head, playing pop and trance at breakneck speed. He’s a perfect example of why everyone involved in the label is so interesting – whatever mask they’re wearing, they perform and produce with incisive intent.

Listen to his split on Whities with upsammy.

Another outfit from the city’s burgeoning soul fusion scene, formed in 2015 and met at Leeds Music College. They’ve been busy over the last 3 years and 2018 saw them touring with Tetes de , playing across the country, and capping it all off with a release on the excellent Wormfood! label.

Their sound pulls and teases from hip-hop, soul, jazz and pop – twisting and turning with Esme Bridie’s crystal clear voice. Their name can be taken as a perfect summary – rolling through influences and touch-points at speed, yet all delivered with the sultry sweetness of nectar.

Jon Nash will probably be a familiar name to many. He’s been a key member of countless bands including Cowtown and Hookworms, and he crops up everywhere, even throwing some great guitar work into Galaxians’ (see above) debut.

Game Program, his electronic project, has taken on new immediacy of late, releasing two fantastic EPs this past winter on Domino. The latest is Water, a classic slice of glistening-smooth bass lines and shimmering melody – heavy on the FM synthesis and poolside relaxation demeanour.

Dip into the water here.

Crumbs play a sturdy post-punk that goes straight into the meat of it – catchy, poppy choruses that repeat and repeat until they’re firmly stuck in your head. The stretched across Leeds and York but have heritage in the former, with drummer Gem Prout also known as the ever-reliably fantastic promoter Fancy Claps.

It’s a simple setup – just drums, bass guitars and lead and backing vocal. But why break something when it works? Their debut album, Mind Yr Manners is a joyful ride through everything that’s great about indie rock and post-punk.

Cattle have been causing a lot of excitement over the last few years as the latest noise rock band to hit the sweet spot. It’s a fearsome setup – bass, dual drummers and vocals joined by a ‘noise box and sound rod’.

There are points that nod to the area’s heritage and Bradford’s That Fucking Tank, but they take it somewhere completely different – straight into the realms of hardcore, doom and beyond. They’re absolutely fearsome live and have been racking up some fantastic dates across the country to prove it, including a set at Raw Power festival, the home for guitar noise you can trust. Highly recommended.

Listen to Nature’s Champion by Cattle.

She also curates Ladyz in Noyz, an international compilation series and monthly radio show that’s been celebrating and promoting female sound artists and experimental musicians for over a decade. She’s released on Graham Dunning’s (of Mechanical Techno fame) label Fractal Meat Cuts, and Leeds is lucky to have her!

Check out Shursh by Marlo Eggplant from the latest compilation.

New Position is pure pop, dripping with R&B and funk. It’s led by 3 incredible vocalists who’ve collaborated with many artists on this list: Alice Kim, Pariss Elektra and KONL.

Their latest single, released at the tail end of last year is a prime example of their ‘popcorn-funk’ with plenty of influence taken from the best of latter-years Prince, bouyed by absolutely massive production. It sounds so good that occasionally you forget that – yes, once again, this is another incredible ensemble of live musicians from Leeds. When will the city stop!?

MCs Kosi Tides and Swish met at 15 and have been making music ever since, evolving into the atmospheric, dark hip-hop they make today. They came to their defining, ‘Sabre Sound’ back in 2017 initially working with producer from Texas.

In their own words – it’s mystical, with a bit of trap and slabs of bass menace. Their latest release, Pulp Diction 3 follows in this vein and has been released with reinterpretation of scenes from Tarantino’s finest in the video for DayTwoRescue.

Listen to The NorthaZe’s Pulp Diction 3.

Now for some electronic pop from a completely different angle – Peakes make brooding, retro-tinged songs with space and restraint. elements of post-rock and their EP Space already sounds ready for big stages, but it never strays into the big-band territory of many of their compatriots.

My inkling that there might be some Kate Bush inspiration there was confirmed with an excellent cover of Running Up That Hill they did in 2018 for Mahogany Sessions. I think it’s safe to say that you’ll be hearing more from them in 2019.

Check out Space by Peakes.

Despite being an instrumental live band, Long Legged Creatures have done something very brave, letting themselves be twisted and moulded by Ross Wilson’s production to completely warp their sound. It’s a risk that absolutely pays off, and the two tracks on their Bandcamp sound like nothing else I’ve heard in a long time.

There’s a heady nod to drum and bass and IDM, but it’s distorted through effects and atmosphere that bring it straight into the present day. Moving to Noises is an absolute joy, with peppy bass lines and drums dancing round a keyboard line which sounds dead-on like Konono No.1’s distorted thumb pianos.

Enjoyed this article? Check out our guide to Leeds record shops.