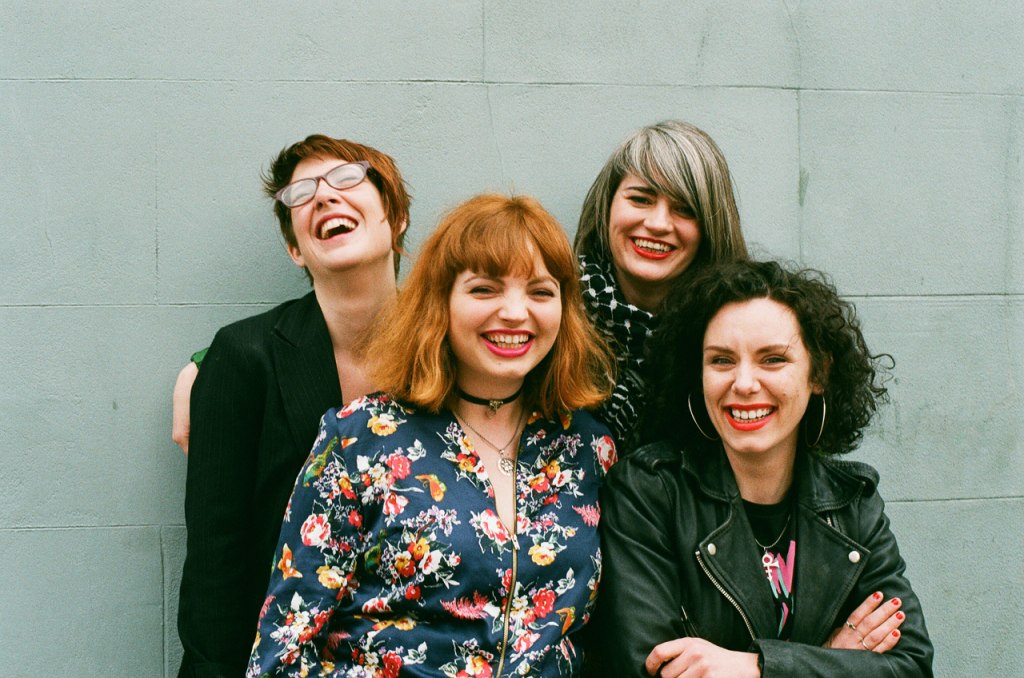 Emerging Musicians and Bands from Manchester: a Pink Wafer Guide

Manchester’s music scene is always absolutely buzzing, and 2019 looks to be no exception. Here’s our round-up of the Manchester bands and musicians that are getting us excited for the year to come. Check out these twenty new, unsigned and emerging artists from the city, including everything from swampy drone electronics to intergalactic alien funk.

Bethlehem Casuals play a dexterous, sunny, party band clatter – a overspilling box of afro-beat, ska and jazz being carried down the stairs with clumsy aplomb. There’s something in the name too.‘Minds Eye’, the second track on their fresh debut album rolls along with the most undeniable of struts. However – this is a strut translated and twisted into something wilder by a myriad of influences from the world beyond Manchester.

Following a myriad of EPs, March 2018 saw them self-release their debut album ‘Feels on Wheels’, and after sets at Latitude and Stay Fresh Fest, they’ll undoubtedly be soaking up festival slots across the country in 2019.

A key member of Blancmange Lounge, the super exciting pop collective that straddles the pennines, Rosey PM makes warm, fun guitar pop that carries you along gently. Both the guitar and her voice have a brilliant depth and range in tone, which makes her latest EP ‘After School Club’ a heady listen. This is buoyed by the production, steeped in an essential liveness – making it sound like you’re listening to Rosie in some elysian wine bar – which can only be a good thing, right?

Wine bar through these doors here.

Ask My Bull are an instrumental four piece, drawing the best elements out of the ever growing wealth of music that fuses contemporary jazz and post-rock. Their latest track, ‘Army of Swans’ twists and turns into endless new avenues and sounds, but consistently carries a groove and pulse, moving them into exciting new territory away from more ambient and abstract peers. Their ‘flamboyant jazz punk’ constantly surprises and clearly is something meant to be heard live.

They recently completed a live score for the play Oct.O.Pus, and a debut album is reportedly in the works for later this year – one to watch!

Be coerced by the Army of Swans here.

Another Manchester artist rightfully getting huge amounts of hype is Afrodeutsche. She’s been active for years as part of the city’s underground, but has recently come to the fore with a debut album on Skam Records.

This record, and her legendary live sets are clear, crisp hardware driven sagas that bring to mind the early days of techno and electro when artists like Jeff Mills embraced darker, mysterious concepts for inspiration. Like so many rising stars, she’s also got an excellent regular monthly show on NTS Manchester.

Listen to ‘I Know Not What I Do’ from the amazing compilation Volume 2 here.

After 2 singles released over the last couple of years, 2018 saw Denim & Leather cement themselves as one of the most exciting new hardcore bands with their debut album Sacred Autism. Released on Drunken Sailor Records, it’s an absolute whirlwind and a record that they’re quite rightly excited about.

The band is fast – and super, super tight – to the point that at certain moments it feels like they’re all triggering each other with some sort of human midi. It’s lifted away from any risk of sounding too rigid by the vocal, which flutters between full grunt and desperate salutations to local and national demons. They also sound exactly like the name would suggest, which is always hugely satisfying.

Yerba Mansa are a self-described ‘free rockin guitar and drums duo’, made up of members of Desmadrados Soldados De Ventura, Irma Vep, Birchall-Cheetham duo & Klaus Kinski (there’s only two of them so they’ve obviously been busy). It’s a rolling, swelling form of noise-rock with moments akin to Lightning Bolt, and others to Jealousy Mountain Duo – all carried on psychedelic waves of dynamic conversation between distorted guitar and frantic drums.

Listen to ‘The Other Thing’ on Bandcamp, released on the Very Bon label.

Karl D’Silva is a polyglot, having performed across multiple projects and styles with raw determination. He’s perhaps most known for his incredible saxophone work where he uses circular breathing to rattle through drones and arpeggios, often performing alongside Rian Treanor’s (Death of Rave, Planet Mu) dexterous electronics.

He’s got an incredible CV, as a current member of noise/power electronics group The Vanishing, and with past performances alongside Thurston Moore, Damo Suzuki, Okkyung Lee, Ex-Easter Island Head, Rhys Chatham and Stephen Mallinder of Cabaret Voltaire to name a few. He’s now turned his hand to solo pop music and early signs look like it’s going to be an incredible project.

‘ROUTINE MAINTENANCE ON THE INITIATION TUNNEL’ a track from her latest EP perfectly evokes a mist shrouded chapel late at night in a Giallo horror, and whole record is filled with sounds akin to the BBC ‘Sound of Horror’ LPs made by the BBC Radiophonic Workshop throughout the 60s and 70s.

The EP in question (self titled) has fittingly been released on the French ZAMZAM, and while the tape is long sold out, you can still listen on their Bandcamp. Highly recommended.

Manchester trio Working Men’s Club are getting a lot of hype at the moment, and their debut single Bad Blood has just been play-listed on BBC 6Music off the back of a string of live dates across the north. The track’s an interesting mix of tones.

It starts off sounding like Brix Smith era Fall, until a Talking Heads style synth stab comes in from the left side and throws you off course. Through and through, it’s indie rock at its finest, with a sturdy and reliable trio of guitar and bass that drives it along. One to watch for sure.

Henge are deeply unique and extremely clever. Not content with making dance-able and deeply evocative sci-fi space-rock, they’ve gone a step further. They help architect one of the weirdest ‘nights’ I’ve witnessed. As part of the Space Cassette team, they arrange events where entire audiences are abducted in a giant spaceship and are taken on a galactic journey sound-tracked by suitably cosmic bands.

Their LP Cosmic Dross draws from this and presents a glorious psychedelic offering of festival-primed treats. They’re on tour throughout February, so catch them live to see the best Frog-Humanoid drummer this side of the galaxy.

Board the spaceship here.

She’s also a fantastic producer, with one of her tracks ‘nova geração hitch’ being picked up by Fact Magazine last August as ‘the most-out-of-the-blue blend of the month’. Alongside all this, she’s got a residency show on Limbo Radio, mixing guests and wild new music with round tables on pressing issues in club culture. All things considered, we’re sure she’ll be even busier this year.

Listen to Clemency on Soundcloud.

Another member of Mutualism, Iceboy Violet makes piercing, incisive experimental club music using grime samples and glistening, harsh electronic loops. Their debut release, ‘MOOK’ came out in December 2018 on London based TT (FKA Tobago Tracks), and they’ve been playing a string of amazing live performances alongside the likes of Eartheater and Yves Tumour.

As a DJ, they keep it similarly dark and disorientating, playing everything from drill music to Charli XCX. Their style and approach is emblematic what makes Mutualism so exciting as a label and event series – a relentless desire to twist and distort electronic club music into new territories.

As the name might suggest, this is another group that trades in dread, improv and shrouds of noise and feedback. The Calderdale/Manchester collective have been playing all over the city and are making quite a name for themselves.

It’s easy to see why. Rather than relying on the brute force of dense, impenetrable noise, their music is clearly layered, with thin, delicate strands of noise, sirens and helicopter noises drifting across each other. They understandably keep their operations suitably mysterious but seem to describe their music as ‘Psychopposition- Advanced Guard’. Very promising.

Listen to their EP on Maybles Label here.

I first saw ILL a few years back at the much beloved Carefully Planned All-Dayer, where they were by far the best band I’d seen in months. Fast forward around six months and a member nearly trapped me in a ‘noise coffin’ at Supernormal Festival by accident. To be honest, even that’s an honour – ILL are absolutely incredible.

They’re direct, immediate and are one of those wonderful new bands that takes stock of pretty much everything awful about guitar music and overturns it completely. Their debut album, ‘We are Ill’ was released last year on Box Records. It’s a furious ride, with amazing layers of vocal sitting on a sea of effects-ridden guitar and keys.

Listen to ‘Stuck on a Loop’ here.

Sarah is a soulful, arresting Sufi singer based in Manchester, who comes from an Islamic tradition of religious singers – including her father Sufi Muhammad Yaseen. Trained from an early age, she’s renowned for her mesmerising performances, usually accompanied by guitar or djembe.

Across the Pennines, you’ll also perhaps recognise her as the lead singer of groundbreaking world music fusion band Rafiki Jazz, recently signed to Riverboat UK Music. She’s been involved in a number of fascinating projects recently, including a folk interpretation of an archaeological dig.

Listen to Sarah the Sufi.

Another electronic band, this time with a significantly more industrial bent. Gwendolen Osmond and Doug Hemingway channel dystopian dread with layers of squall, underpinned by thick beats. Despite the industrial and post-punk drive, the music is deeply emotional and human – evoking a similar technique to Deutsch Amerikanische Freundschaft’s Gabi Delgado-Lopez.

The project started as Osmond’s solo outing, but the recent addition of Doug Hemingway has seen the (now) duo make extensive headway with live gigs around the city.

Described by the Manchester Evening News as the ‘band most likely to create utter dancefloor delirium this year’, this six piece is from solid stock – including former members of Silverclub, Sirconical and The Pipettes.

The sound is good, honest electronic pop but with a surprising muscular density, which certainly must account for the rave reviews of their recent live shows. Their debut EP ‘Hot City/Connectivity’ is a synth and rhythm ride, akin to Leeds legends Galaxians, but with a direct drive that bodes well for the future.

Listen to See Thru Hands.

Jennifer Reid is a truly unique performer in the Manchester region – in fact, country-wide. She performs and researches 19th Century Industrial Revolution Broadside ballads, and has been picking up a great deal of interest in the region’s folk scene and beyond.

She’s been involved in a huge range of fascinating projects, including a collaborative residency with Simon Woolham, where she walked 120+ miles along the Leeds to Liverpool canal route, exploring songs about travelling for work and the liminal existence of navvies.

Find out more, and check out her album here.

This Salford band seat themselves firmly in the vein of bands like Fat White Family, and Bristol’s Lice, with greasy, dirge tinged garage rock that is as catchy as it is unsettling.

Their debut EP ‘The End of the Party’ has great depth though – as ‘I am the Swan to Your Song’ rolls along, violins and brass suddenly launch themselves out from behind the parapet. They sound like a lot of people having a wonderful time in a pub. Doesn’t that sound nice?

Listen to their contribution to a Roadkill Records compilation here.

Warmly lo-fi with melodies in all the right places, it goes straight for the heart and stays there throughout. Next time you’re feeling a bit sad, we highly recommend you delve into their Bandcamp and wallow with purpose.

Want to get stuck into the Manchester scene? Check out complete guide to Manchester music venues.