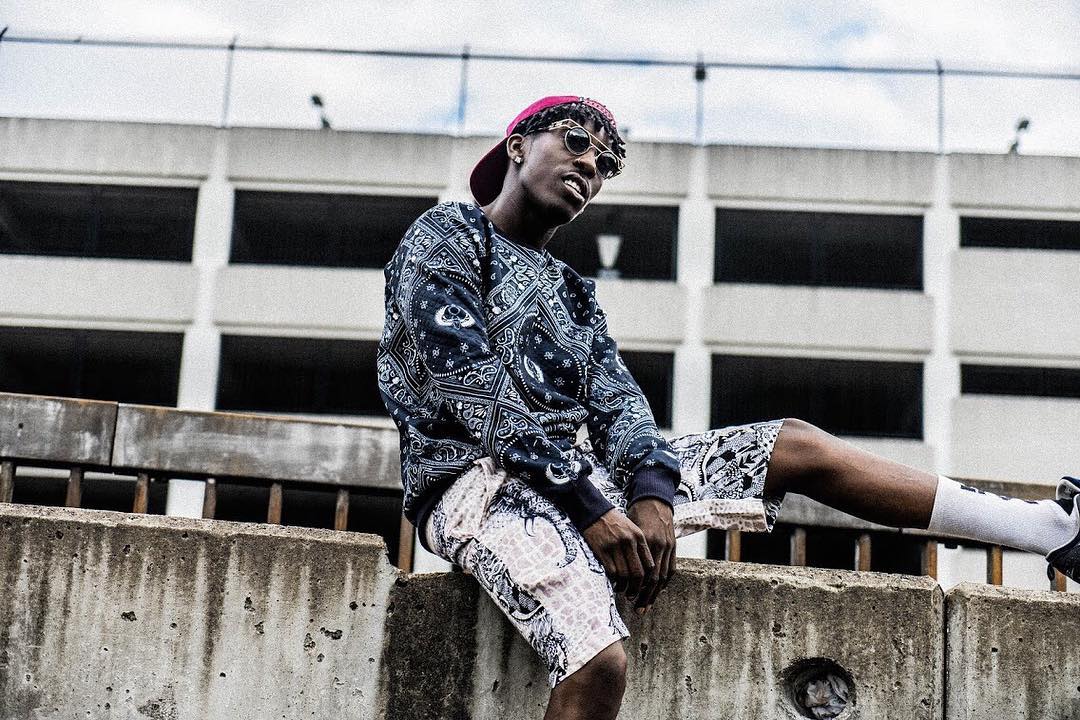 Producer and grime artist Dubzy has been making music since childhood – at least until the accidental success of his fashion brand, Snazz, put his music career on hold. But now, as he tells Pink Wafer, Dubzy’s back – and he’s returning to his first love.

We had the privilege of hosting Dubzy on the Pink Wafer stage at Peddler back in October, and things literally went off. It was a struggle to pull him away from the almost endless stream of new fans he made that night, but we managed to grab a quick five minutes after the set to learn about his story. Here’s what he had to say.

So, what’s the story of Dubzy?

I was born in London, and originally grew up around Tottenham. But when someone got shot outside my house, my mum decided to move us to Derby. Since then I’ve lived in Sheffield, Nottingham, Manchester, all around the North. A lot of people have a single place they grew up in, but I’ve lived in so many places. Between the age of five and sixteen, I went to five schools. It’s mad! But I like to think that means I understand people from more places, and it’s made me a bit different to say the typical grime emcee or rapper.

That’s a lot of upheaval. How do you think it has it shaped you?

The pain and the happiness I’ve experienced in these different places has helped me write my lyrics and produce these tracks. I’m at a place now where the music I’m making is very much from the soul, from the heart.

The project that I’m working on that I performed tonight at Pink Wafer is from my forthcoming project which is called 12:48, which is the time I was born. And it’s also the time, coincidentally, that my son was born as well, which is really weird. It’s on both of our birth certificates, so I thought I’d call it that because it’s like my homecoming.

I’ve grown up a grime emcee, and come through a lot of crime, and badness. But I always knew the path to good, because of the way I was raised. So it’s always been a battle between good and bad for me.

I went on to produce a lot of music in the process, out of my anger and my issues, and I used my intelligence to go to uni. So I’ve had a lot of different influences in my life. But it’s led me to now, where I’m a musician and that’s what I do full time, and that’s what I love doing. And I’m loving my life right now. It’s literally all love. It’s been amazing.

Can you tell me about Snazz, and your experiences in that world?

Yeah, Snazzback. Yeah, shit man! When I was at uni, everyone was getting free money, student finance, and I was like, I don’t know what to do with it – free nights, and I’m a lightweight so I was drunk before I was even in the club. But I was doing other stuff for money, and I had a little bit saved, so I thought “I’m gonna expose my brand.”

So I went on BBC 1Xtra – they invited me to go and do a show. And when I did the show, I happened to be wearing my own hat. When I saw it on the BBC website, I said “I may as well make this a proper thing, if it’s on the BBC website and it says ‘Snazz’, and it’s on my head.” So I thought, can I be bothered with t-shirts, jackets and so on? So I said, “I’m just gonna do hats, ‘cause everyone’s got the same sized head.”

So it was sort of an accident. I just started putting hats on people’s heads, and I just said let’s see where it goes. Because I was never a fashion designer – I was always a musician.

But I ended up putting it on David Hay, Ashley Young who plays for Man United, Scott Sinclair, within three months. So I said “OK, I’ve gotta take this serious.” I ended up getting investment and that, and Snazz started to move. It grew so that I was able to buy a house when I was just leaving uni. So that was nice. Snazz has been an amazing experience, and I’ve met a lot of people.

They did a billboard and you could see it on Oxford Street, Regents Street, in Sheffield, Manchester, Birmingham – a big billboard with “the Snazzbacks.” And I thought, “OK, this is good.” So it kind of distracted me from music for a minute, which isn’t good. But the good thing was I was enjoying the experience and learning from it.

The best thing I can say I’ve learnt from it is that money isn’t everything. I was so hung up on let me see how much money I can make, because of the business and la de da, that I forgot about being happy.

When I made my music again and started focusing on that, that’s done a lot of good for me. This year I’ve been to Belgium, Italy, Spain, Holland, Germany, and Denmark to perform. And I’m not a big artist. I’m not Jay Z. I’m not even Stormzy. But doing grime with positive energy, it can take you around Europe if you have intentions, and that’s what I’ve always decided to focus on doing.  The point I’m trying to make is that I love Snazz, but I love music more.