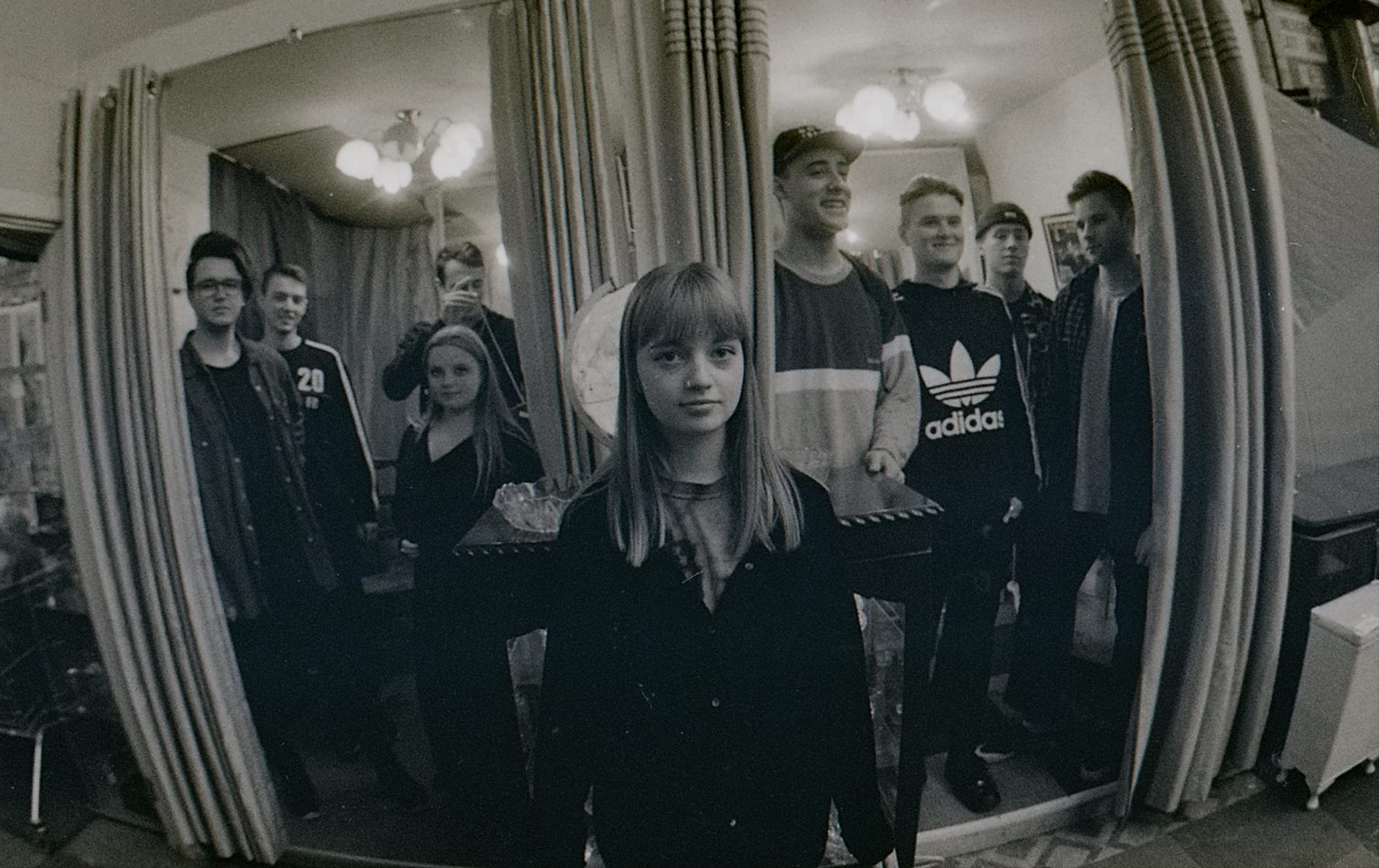 Nine-piece Necktr are one of several super exciting new bands coming out of Leeds. Drawing on neo-soul, jazz, and hip-hop, their debut EP, Something’s Happening, is an absolute sizzler.

We spoke to them about the new record, the Leeds music scene, and how they hope to push the boundaries of neo-soul.

What’s the story behind Necktr?

So, we formed off the back of a couple of us initially being put together in a performance group at uni. That core kind of sparked a chemistry and then we started to bring in other people that we were enjoying playing or working with until we settled on the current line up around this time two years ago. We played our first ever gig cramped into the bar area of a pub as part of a Socialist fundraiser (unusual, I know), and from there just carried on gigging extensively in Leeds, playing bigger and better gigs thanks to the support of our mates and some really key promoters in the city – Lubi Jovanovic and the guys in Tight Lines.

From Leeds we branched out into doing more shows across the country and we adopted a kind of DIY attitude; just decided to book ourselves a tour with our mates in Tetes de Pois. From this point we started reaching more people with our music in a live setting, and the gigs are getting better and better – bigger venues and more people at every show.

Over the summer we were lucky enough to get the attention of a record label called Wormfood Records that has a roster of bands we’re big fans of, including Nubiyan Twist and K.O.G. We’ve been working with them for the last few months and we’re going to be dropping our first EP through them on the 23rd November. We’re crazy excited to finally get it out into the world.

Tell us about what’s happening in Leeds at the moment. What artists are you excited about right now?

The Leeds music scene is a bit of a madness at the moment – loads of wicked bands that span across a crazy amount of different genres. There’s been a huge surge in the soul / hip-hop / jazz scene over the past few years, but there’s also way more than that too.

Artists that we’re personally really excited about at the moment are Long Legged Creatures (LLC) and Tall Talker (who both supported us at a single launch back in September), and also B-Ahwe.

LLC play the craziest live electronic music – mad basslines, driving grooves, heavy synth work and live sampling. They get the room pumping at their shows. Tall Talker just dropped a fiery EP called ‘Gino’ that’s a great exploration of mathy jazz rock, and B-Ahwe has got a couple of really cool singles out that are in the vein of like Hiatus Kaiyote and 30/70 influenced neo-soul. She’s gonna be coming with us to Sheffield to play Peddler on the 7th of December – exciting stuff.

Other mentions in terms of what’s going on have to be the recent Leeds jazz compilation called ‘To Be Here Now’, and the upcoming Tight Lines compilation album – check it all out. Putting Leeds firmly on the map.

Jazz-influenced neo-soul seems to be having a moment right now. How do you see yourselves within this context?

Yeah, it seems to be everywhere! To be honest, there’s definitely a big neo-soul influence in our music, but there’s also a lot more than that too. Because there’s nine of us we all bring something different to the table with the writing. Some of us are big into world music and then there’s others that are into hip-hop, but also people that are into darker, heavier and more ambient music too. I think we’d like to say that we’re pushing the boundaries of what can be confined in the bracket of neo-soul.

How do you relate to what’s come before you musically? And what do you hope to bring that’s new?

With there being so many of us, there’s so many different influences from music that’s come before.

To break things down a bit, we definitely identify mostly with the darker side of hip-hop and trip-hop music that’s come out from the likes of MF Doom, Madvillain and Portishead. However, we also draw a lot from afrobeat stuff from people like Fela Kuti and Ebo Taylor, and even from further back than that with the whole jazz-afro-cuban thing that people like Kenny Dorham were playing back in the 1950s. The neo-soul influence is definitely more recent than that though – Moonchild and the RH Factor were like a gateway drug into the world of D’Angelo and Erykah Badu.

In terms of what we hope to bring that’s new, it’s a fusion of all of these genres that’s progressive. We want to be pushing the confines of whatever genre box people try to place us in and also use all the elements of the artists and genres we’ve mentioned to create a sound that most people genuinely haven’t heard before that’s surprising and interesting.

We’re not massively in the loop with the Sheffield scene, but we’ve noticed recently that the kind of music that’s growing in Leeds on the soul / jazz front seems to be seeping across the Yorkshire Dales and flowing into Sheffield which is really cool. We’ve had a great time playing in Sheffield so far. The show in December is our fourth in the city now, and the music always seems to go down really well. I suppose the preconceptions are that Sheffield’s scene is fairly guitar-music heavy with the whole Arctic Monkey’s and Bring Me The Horizon connections, but it’s wicked that there seems to be a growing scene for jazz, soul and world music that involves people like K.O.G and the Mango Rescue Team.

We’ve got a pretty exciting month lined up in the run up to Christmas. Our debut EP is out on 23 November through Wormfood, and it’s called Something’s Happening. It’s being pressed on vinyl too, so everyone can cop one at a live show or through our Bandcamp! We’ve also got a music video coming out the last single, ‘Take Your Time’ in the near future, so keep an eye out for that. Also, TOUR! We’re playing a load of shows in November and December to support the release, and we’ll be announcing more in the New Year too. Come and catch us at Peddler in Sheffield on Friday 7th December for a big ol’ Friday night boogie.

Check out Necktr’s new EP, Something’s Happening on Bandcamp and all major platforms.