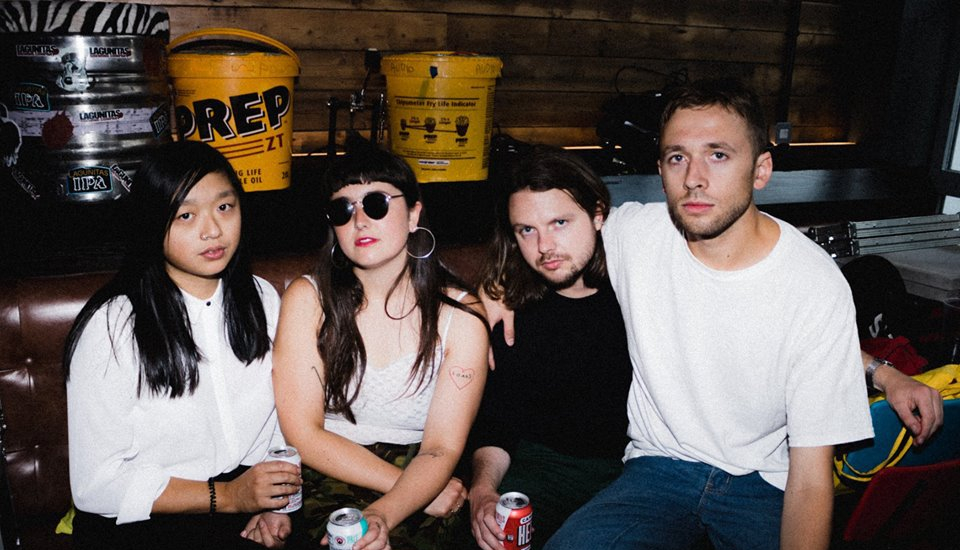 Blancmange Lounge is the name behind half-a-dozen glorious genre-spanning musical projects in Sheffield and Manchester.

A small but prolific collective, Blancmange Lounge bring a sophisticated restraint and light touch to all their music – from the dream pop soundscapes of Rosie PM, to jazz hip-hop with Otis Mensah, and the gnarled soul sounds of Jackie Moonbather.

So where did these maestros come from – and what’s with all the millennial pink?

Who is Blancmange Lounge?

We’re a music collective, to put it simply. We’re also a group of friends. The core members are Jackie Moonbather, Oliver Harrap, Katie Pham, and Rosey PM. But there’s more people involved in a bunch of ways.

So what’s your story – how did Blancmange Lounge begin?

We were making music together – like someone had written some songs and the rest of us would be their band, filling in on whatever instruments they wanted. Eventually there were a few bands, with pretty much the same members on rotation. We felt there should be a collective name to house all the bands under and release our own music, so Blancmange Lounge was born.

The name is a long story. Maybe we’ll go into that another time. But don’t worry, it doesn’t mean anything, so you’re not missing much.

Tell me about the artists associated with Blancmange Lounge.

There’s Katie Pham and The Moonbathers, which is Katie, Oliver and Jackie.

Rosey PM – she’s based in Manchester. Jackie, Katie and Oliver are in her band.

Jackie Moonbather has Oliver on drums, Mike from RiteTrax on bass, and Tom from Ish Brother on guitar.

And Dizz Park is the beat making duo of Jackie and Wade Deacon.

We also work with Otis Mensah. Oliver and Jackie play in his live band and at Sheffield shows there’s always a high chance that Otis will hop on the stage with Katie Pham and The Moonbathers and kick a freestyle.

Most of the artwork on our releases is by Alice Seed (Voyager & Blancmange Lounge Sessions, etc) and Isabel Scott (Sleepover Songs & Babysitting). We also work with a Manchester based artist, kidmilk, who did our logo. They really help everything come together visually.

Do you do your own events?

We do a few nights, where we will DJ and sometimes have live acts on. And every other week at The Cremorne, Sheffield, we basically just bring our record collections down and spin ’em. We have some competitive spirit amongst ourselves, like, who’s got the hottest vinyl?! We’re at The Cremorne every other Wednesday and we’ve just started doing the same on the last Friday of the month at Piccadilly Tap, Manchester.

Nice! So what’s next? What’s in store for the future?

The next release we have coming is Jackie Moonbather’s The Month Of May, which is going to be released – you guessed it – in May. We’re really excited about this one. We really captured the sound that we’re after.

That should be closely followed by Rosey PM’s third EP, After School Club. A continuation of her dream pop trilogy, this one completely solidifies the Pyjama Jazz sound.

There is new Katie Pham and The Moonbathers on the way, a new wave for the band – you have to wait for the plot twist on that one though.

This is going to be a busy year – Jackie Moonbather and Otis Mensah collaborations in the pipeline. We have our eye on Joey Mojito too – we can’t wait to get him in the studio. That’s super exclusive news though. If you’re reading this, don’t tell anyone!

We’ve also just been in the studio with super hot producer Kardanski from Haven’t Slept Since Records in Manchester. Can’t wait for that to surface too!

Support Blancmange Lounge on Bandcamp, and keep up with their news on Facebook.