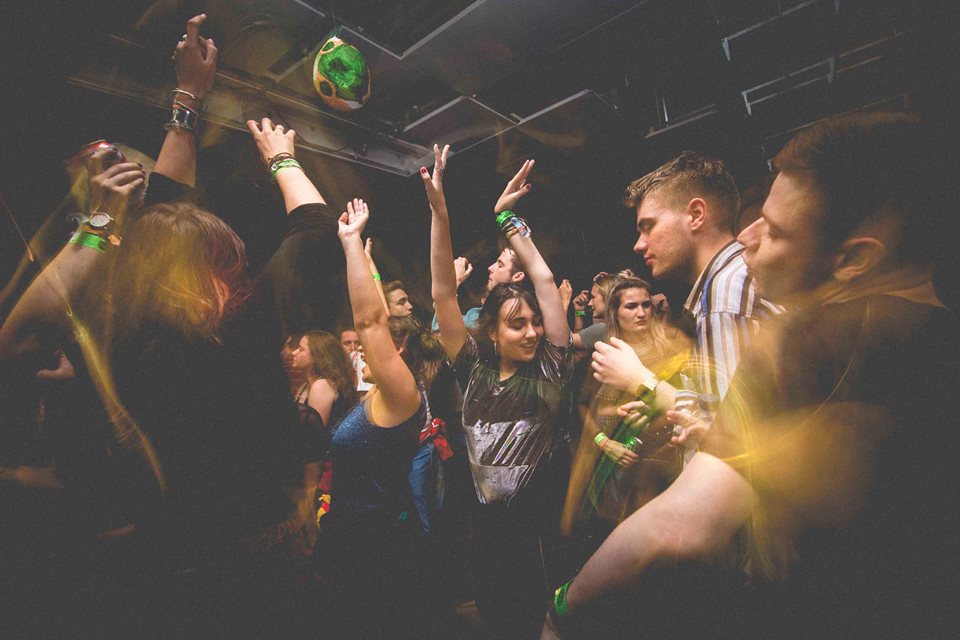 Sheffield’s alternative and underground electronic music scene is one of the best in the UK.

It’s a well-kept secret. But for those in the know, the range of underground club nights that happen in Sheffield is amazing.

From techno, to house, to bassline, to grime, and everything in between. Whatever your taste in electronic music, there’s an underground night in Sheffield for you.

Here are 24 alternative nights you need to check out.

With frequent nights at The Harley and raves at Hope Works and the Southbank Warehouse, PPG have been consistently throwing some of Sheffield’s highest quality parties. Fans of techno, house, and IDM – this is top drawer stuff and you need to get on it.

Super fun, inclusive bass parties with crazy decor – think flamingos and gold mannequins. Bringing in major bookings from around the UK to venues including The Night Kitchen, The O2 Academy, and Hope Works, Bluewave are the essential crew for all things bass music.

Mango Disco do everything from raucous carnival raves at Yellow Arch and The Night Kitchen, to intimate gigs at Haggler’s Corner and The Washington. Crazy, inclusive parties with tropical decor, tacos, and an eclectic mix of reggaeton, digital cumbia, kuduro, Latin boogie, and more.

Psytrance veterans Planet Zogg have been running hyperdelic parties for nearly two decades, and they know how it’s done. Recent events have seen them packing out The Night Kitchen and Plug, drawing a super diverse crowd who share one thing in common – they’re all up for a mad party. Events include live hula-hoopers, cosmic visuals, and chai tea served by Freak Street Café.

By focusing on creating artful and immersive experiences, Nice Like Rice have thrown some of the most enjoyable parties Sheffield has seen in recent times, and their emphasis on quality and inclusivity has made their nights a massive success. They’ve thrown mega-parties at The Night Kitchen and Hope Works, multisensory experiences with Cosmic Disco at Theatre Deli, as well as more intimate events at Bal Fashions.

Force Majeure put on amazing nights on the more experimental end of bass music. Generally opting for intimate venues and DIY spaces, FM have hosted some of the nation’s most cutting-edge instrumental grime producers at venues including S1 Artspace, The Audacious Art Experiment, and Bal Fashions. Most bookings are DJs, but FM also frequently feature live analogue acts.

Cut Some Capers are relative newcomers to the scene, and they’re rapidly making a name for themselves with their quirky parties. Their policy is that all guest DJs have an experimental side – as the above sample shows – and their nights guarantee a taste of musical weirdness, branching out from a house and techno base. Watch out for the awesome posters that herald each event, and get yourself along to one of these nights.

After moving from Nottingham to the fertile fields of the Steel City, Barang have been regularly putting on percussive bassy dance music from around the globe, bringing in some major international bookings. They host most of their nights at DINA, and usually open the evening with a beautiful veggie dinner before the music gets going. People literally travel from all over the UK for these super nice party vibes – true story.

The Tuesday Club has been the unshakeable core of Sheffield’s underground electronic music scene for two decades. Still at the cutting edge with consistently high quality bookings, their parties are as special today as ever. The Steel City’s longest-running independent night, TTC is, quite simply, an institution.

New kids on the block Fruit n Juice are an arts collective, launched toward the end of 2017. So far they’ve hosted just a handful of eclectic nights, plus a few DJ workshops. In just a few months they’ve made a real mark on the scene. Keep your eyes peeled for more.

Riddimtion has a long and illustrious history in Sheffield, spreading good vibes and hosting dozens of top-notch reggae and dub nights for over a decade. Check out their regular nights at The Blues Bar in Broomhill, and watch out for special big events.

Saul’s Sessions spin discs regularly at The Wick at Both Ends and The Harley, as well as making recent appearances at Peddler Night Market, and forthcoming nights at Bal Fashions. They like to debut fresh talent from outside the city, and they keep their nights small, inclusive, laid back, and affordable. Watch out for their cheeky alter ego, Saul, who makes an appearance on all their artwork.

For several years, Sheffield Techno Institute have been spinning techno from across the spectrum, from model 500 and kraftwerk to modern acid, electro and techno – from chilled to fast and furious. They only throw about three parties a year, but when they do, they’re special ones, at venues like The Night Kitchen and Hope Works. Make sure to follow them to stay in the loop with these super special parties.

Newcomers Lady & the Trap have put on just a few nights since launching in the latter part of 2017, including a joint effort with Peachy, and it’s been non-stop good times since square one. Probably the only night in Sheffield that regularly spins footwork and trap. Keep your ear to the ground for exciting things to come.

La Rumba have been getting themselves everywhere since launching in early 2017, and it’s been a joy to see. Playing a mixture of house, techno, disco, and global rhythms, they regularly host nights at The Harley and at The Wick at Both Ends, as well as collaborating on bigger raves with the likes of Mango Disco, Decibel, and Pretty Pretty Good. Not-to-be-missed for fans of global dance music.

Focusing on “people and places” rather than DJs, Sourdough may not have any big bookings to gloat about, but they’ve been creating great vibes in some of Sheffield’s most exciting underground venues. Prepare yourself for an eclectic platter of disco and global grooves, with a healthy serving of bread-related puns on the side.

The inimitable Off Me Nut crew have been throwing some of the most insane parties in the UK for several years. They spin bassline, jungle, happy hardcore, donk, and more, creating all manner of craziness and hilarity. They regularly take over the big spaces in Sheffield from Hope Works, to The Night Kitchen, to Trafalgar Warehouse. Check out their weird and wonderful Facebook group to keep up with these jokers and their nutty community.

Decibel strike that delicate balance of showcasing local, up-and-coming, and big name DJs, while keeping things affordable and accessible for all. Decibel is mostly about techno, but guest DJs often explore the limits of the genre, leaning towards the deeper, darker side of things. Get along to their regular events at The Harley and further afield.

Ecoutez have been putting on sporadic events for a few years, and have recently been gracing Sheffield with fairly frequent nights as part of Foodhall’s Friday Lates program. Truly eclectic, it’s something different every time – but it’s always vibrant and fun.

It’s never been difficult to find reggae and dub in Sheffield, and crews that need a mention include Dubcentral, Dub Shack, Shanty Town, and Riddimtion (above). Sheffield is also home to the mighty Sinai Soundsystem, and Chief Pukka Soundsystem. But for regular big soundsystem nights in Sheffield right now, ROOTS are the ones flying the flag. Get yourself down to one of these for nice vibes and serious soundsystems.

Poggerz grew out of big university house parties, with the aim of sharing these chaotic, hedonistic, magical events with more people. With their big community vibes, Poggerz is constantly growing, taking over venues from The Harley to DINA. Super fun.

BHAUS go for emerging, underground names with them aim of showcasing them to their growing crowd, playing house and disco from across the spectrum. Listen out for their sick new lo-fi house productions from The Native Project, and watch out for nights at The Harley and The Wick at Both Ends.

Dusktildawn have been putting on multi-genre nights in Sheffield for years, putting on a diverse multi-genre mix of music that always culminates with breakbeat and DnB headliners. Check out their regular nights at The Harley and big events at The Night Kitchen.

RiteTrax are truly special bunch within the Sheffield music scene. As a social enterprise, existing specifically to support and provide a platform for underground artists, nights are just one of the things they do (read about their other activities on their website). For nights, their two main offerings are The Wub Club for wobbly bass music, and Zone 88 for house and related genres. Also watch out for their amazing free annual festival, RiteTrax on the Bole Hills.

This guide exists to introduce people to new nights and to showcase the variety of what’s happening in Sheffield. If you’re a promoter and you think your night should be on this list, please get in touch.