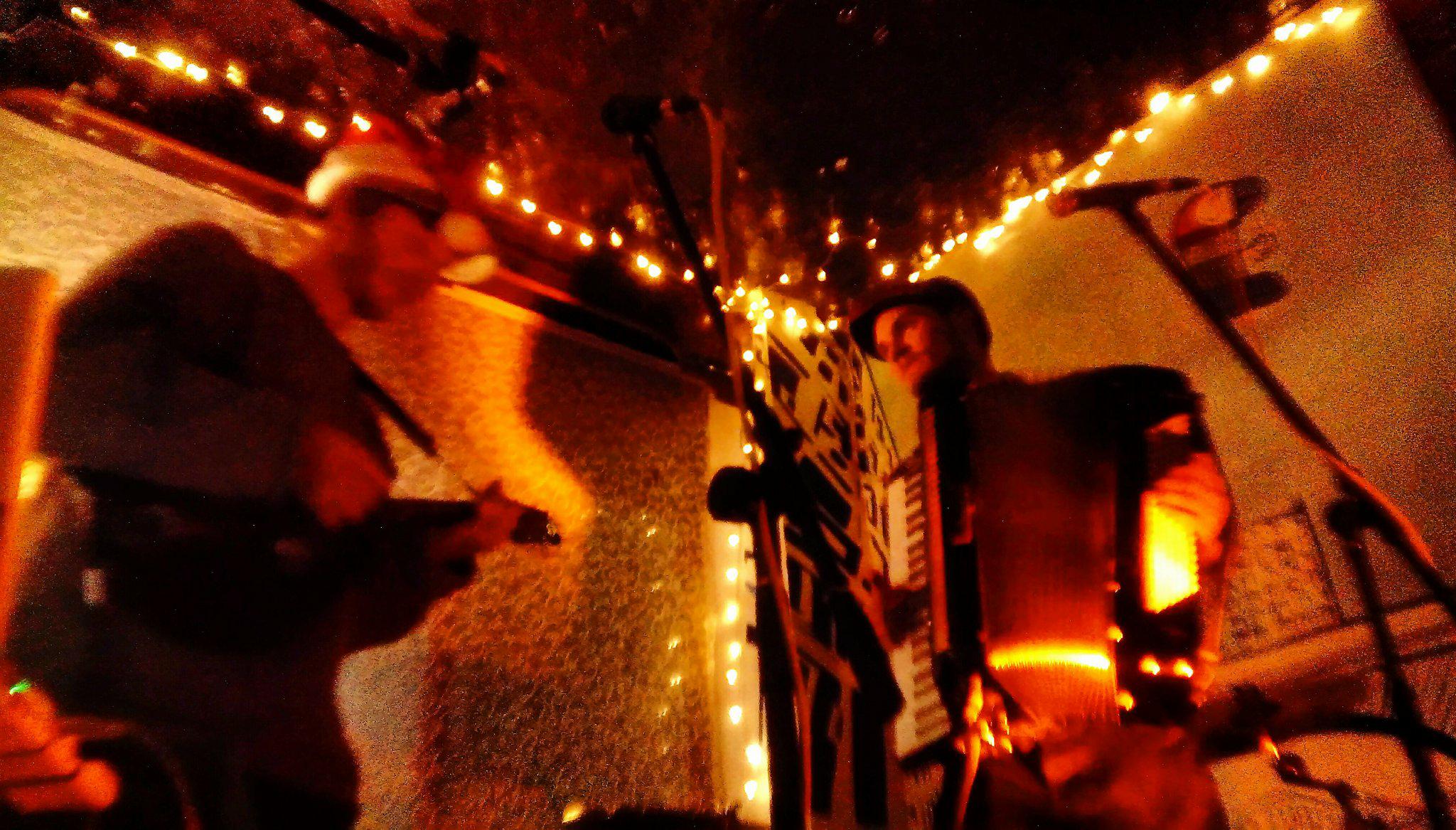 I first saw Yogobella at a ram-packed night at The Cremorne, Sheffield, in mid-autumn. They were playing old folk tunes on accordion and trumpet over disco beats, taking themselves refreshingly unseriously.

The performance was incredibly intimate – not in the tea-candles and fairy lights way. It felt like walking into some kind of seaport tavern, brimming with rowdy sailors and mischief. It was “folk” in the true sense.

About two months later, I spoke to the duo backstage at the Tropical Pressure Festival at Yellow Arch Studios in Sheffield, where they were just about to go on stage.

Dave Westley: It feels like being a pirate, and like being a wandering nobody with an instrument and the tunes of the people under your belt.

I can imagine that. So what is Yogobella?

Dave Judge: It’s a yoghurt brand. I bought this yoghurt once, a cherry flavoured yoghurt from Ozmen, called Yogobella. And I loved it. It’s great.

You’re named after a yoghurt – edgy. For the uninitiated, can you tell us what exactly Ozmen is?

DW: Ozmen is the rainbow isles of paradise, stocked with global foods from yonder and afar.

DJ: Which pretty much summarises Yogobella the band, as well, I’d say. The rainbow isles of paradise.

Let’s talk about your music. Where did your sound come from?

DJ: For me personally, I was in New Zealand in an Estonian folk band, and I came back to Sheffield and started jamming with Dave. We’ve just been into playing tunes from all around Europe, all around the world. We’ve got some from Estonia, some from Peru, Russia, Italy.

And are these all old folk tunes?

DJ: At the moment, most of them are. We started writing our own stuff, too, but, yeah, really old folk tunes.

So, is it a deliberate thing – that you only play these really old, traditional, folk tunes?

DW: No, they just have to be really good tunes.

What are you hoping to bring to these tunes when you play them live?

DW: For me, I’d say I wanna play music that either makes people dance, or which can be moving in some way.

And what does Yogobella do?

DW: Primarily it makes people dance, I’d say. It’s just dancing at the moment, but we’re going to get onto the tears some day.

I think your music is evocative, actually. I remember hearing you play a sort of sea-shanty, and it felt like we’d been transported to some sailor town, where a bunch of sailors had just got off the boat and were gathering in some tavern…

DW: I would say that’s what we’re going for, really. Playing this music is kind of like being able to live through some kind of fantasy dream where we’re actually in a place where there’s not many cars yet, and people just play tunes and shanties, and everyone’s fighting and stuff.

DJ: When we played that gig that was almost what was happening. Not fighting, though! But people recognise a lot of the tunes. There’s a Russian tune we play that’s well known for being the Tetris theme tune, and people start hearing this and they start singing along – so it’s kind of like communal in that sense. It’s like an old, old thing about dance music, folk music. But we’re using modern beats, phat bass lines – what people like to dance to now. So I think it’s like a mishmash of time and place.

it’s kind of like being able to live through some kind of fantasy dream where we’re actually in a place where there’s not many cars yet, and people just play tunes and shanties, and everyone’s fighting and stuff

What does it say about you that you’re playing this music today?

DJ: That we need to get jobs, probably!

DW: Yeah, too much spare time!

DJ: Really, I think it’s about community. We’re doing music because we want people to dance. We want to be involved in music we want to hear, and which would make us dance. I think it shows our appreciation of wanting to bring people together.

DW: Yeah, the music is quite – everything about it just feels quite simple and easy and accessible. It’s super accessible.

DJ: I mean, I couldn’t play the accordion really when I started, so it had to be. I thought it was going to be a limitation but it just works. This gig is going to be a bit of test for us because we’ve only really played the Cremorne, and a wedding. We started off as a busking band actually. So to be whacked up to an event that’s sold 500 tickets is quite nerve-wracking actually.

Find out about the latest Sheffield gigs in our Sheffield Gig Guide.

Blancmange Lounge Are A Music Collective You Need To Check Out